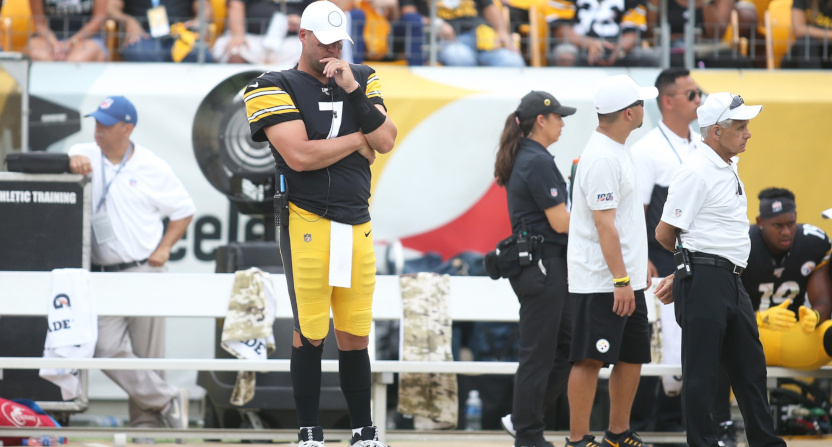 There’s a lot that goes into picking teams for primetime games, from those teams’ performances last year to the viewership numbers they tend to put up. But the picture’s changed in important ways since the schedule was made, and perhaps the most significant comes from quarterback injuries. The Steelers’ Ben Roethlisberger and the Saints’ Drew Brees both were hurt Sunday, and that adds to a notable pile of quarterback injuries (and an unexpected retirement, in the case of Andrew Luck):

• Drew Brees out approximately 6 weeks with a thumb injury.

Looking at the primetime schedule, there are going to be plenty of impacts there. Let’s start with Roethlisberger, who’s out for the season. The Steelers have four remaining primetime games currently scheduled, two on ESPN’s Monday Night Football (hosting the Bengals in Week 4 and the Dolphins in Week 8), one on Fox/NFLN’s Thursday Night Football (at the Browns in Week 11),  and one on NBC’s Sunday Night Football (at the Chargers in Week 6, although that’s after the opportunity for flex scheduling begins). And while second-year backup Mason Rudolph played well in relief Sunday, the Steelers look like a less desirable primetime team if they’re starting him instead of Roethlisberger (unless he manages to really surprise over the long run). And their stock was already taking a hit, as Sunday’s 28-26 loss to the Seahawks dropped them to 0-2. If this winds up being a rough year for Pittsburgh, those primetime games might look a lot less desirable (especially that one against the Dolphins, who are also 0-2 and have been outscored 102-10 so far).

Meanwhile, Brees’ absence isn’t expected to be as long, but Teddy Bridgewater wasn’t impressive as his replacement (17 completions on 30 attempts for 165 yards) in a 27-9 loss to the Rams Sunday, so there are some big questions ahead for the Saints while Brees is gone. And they happen to be playing the Cowboys on Sunday Night Football in two weeks; if the Saints can’t get much of a passing attack going without Brees, that game gets less interesting. (And it’s before flex scheduling opportunities begin in Week 5, so it’s not going to be moved out of primetime.) That may be the main primetime impact of the Brees injury, as the Saints’ other remaining primetime games are in Week 13 (Thanksgiving, at the Falcons) and Week 15 (Monday Night Football, hosting the Colts), which would be after Brees’ expected return. However, if there are any complications, those games could be affected as well.

And while the Roethlisberger and Brees injuries look like the biggest ones in terms of primetime impact, absences from those other quarterbacks mentioned above could have an effect as well. Luck’s retirement raised plenty of questions about how the Colts would do without him, and those haven’t been definitively answered so far; they’re 1-1 with an overtime loss to the Chargers and a narrow win over the Titans. But they’ll be showing up in primetime three times, starting with a Sunday night road game against the Chiefs in Week 5 (subject to flex), then a Thursday night Fox/NFLN game at the Texans in Week 12, and then that Week 15 Monday game against the Saints.

Elsewhere, Darnold is expected to be out for three to seven weeks, so he’s missing the Jets’ Monday night game against the Browns tonight and possibly their Week 7 Monday night game hosting the Patriots. Foles is expected to be out until around Week 11, so he’ll be missing the Jaguars’ Week 3 Thursday night game (NFLN only) against the Titans. Add that all up, and those are 11 primetime games (counting Darnold-Patriots) where one team probably won’t have their expected starting quarterback thanks to injury (or thanks to retirement, in Luck’s case). And that’s to say nothing of all the CBS and Fox afternoon games that will be impacted as well. That’s not so great news for a league that only saw a slight ratings bounce-back last year and the lowest Super Bowl viewership numbers since 2009.