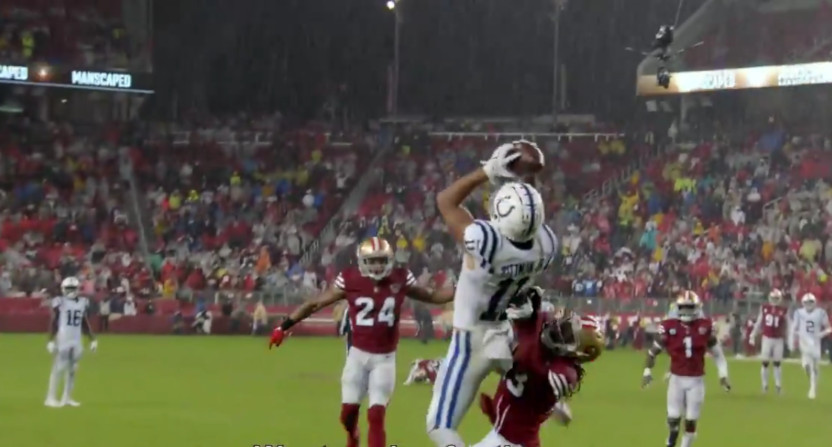 As announced back in September, this year will see the first in-season edition of Hard Knocks, and it will feature the Indianapolis Colts. The famed NFL Films/HBO behind-the-scenes series is usually about training camp and preseason games, and that version continued this year with a Dallas Cowboys series, and will continue next year as well. But this new version covers teams during the regular season, with the Colts being featured this year. And while the first episode isn’t scheduled to be released until Nov. 17, the Colts tweeted a trailer for it Wednesday, with that trailer focusing on the preparations for and the follow-up to the team’s 30-18 win over the San Francisco 49ers this past Sunday:

As the trailer shows, that game was played in severe weather thanks to a “bomb cyclone” over Northern California. And the trailer shows Colts’ coach Frank Reich talking about that before the game and saying “Our mentality is any circumstance, any time, anywhere, plays to our advantage.” The Colts did do a good job of that during that game; through three quarters, they gained more yardage through pass interference calls than they did through the air, with the rain making passing difficult, but they leaned on the ground game and got a big pass play from Carson Wentz to Michael Pittman Jr. (who’s shown celebrating that during this trailer) in the end to seal the deal.

An interesting thing with this trailer, and with this series so far, is that it’s not entirely clear at this point how much of a time delay there will be between the end of filming and the release of each episode. With the preseason Hard Knocks, that can be a very tight turnaround, with events from two days before, a day before, and even sometimes the same day showing up in episodes. Director Tim Rumpff told AA in 2019 “That’s really where we’re at our best, not only telling these stories but also really kind of showing it in real time as well.”

We don’t know for sure that Hard Knocks will have a longer turnaround for these in-season episodes. But the amount of footage here from an Oct. 24 game suggests these may have a longer turnaround from filming to airing. (Which also might help alleviate teams’ concerns about in-season filming; teams presumably don’t want a lot of current inside information hitting the airwaves, but that might be an easier sell if the footage is from a week or longer ago.) Or it might just indicate that they’re already filming to get background on and track the evolution of some stories, but that the actual episodes will be more focused on current events. At any rate, there will certainly be a lot of attention paid to this in-season Hard Knocks when it hits the airwaves on Nov. 17. We’ll see how it turns out.