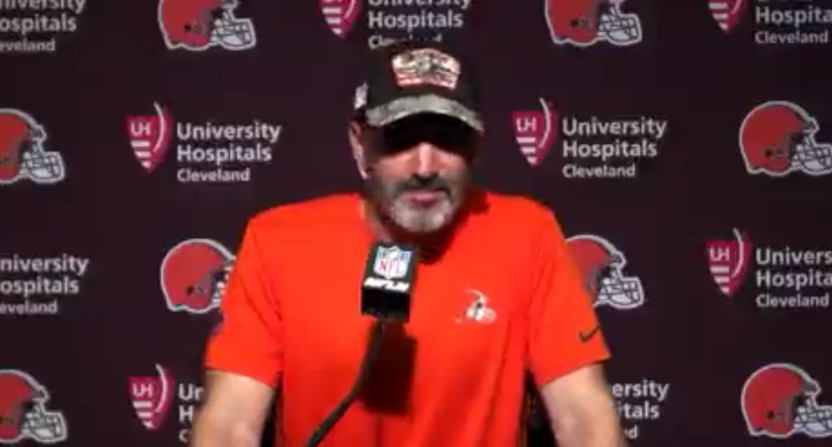 850 AM WKNR, the ESPN Radio affiliate in Cleveland, has come up a whole lot here over the years. A few of those moments include host Tony Rizzo challenging fans planning an 0-16 parade to a fight, contributor Sabrina Parr claiming Jabrill Peppers was “on the lean and the molly” (for the record, Peppers denied doing “whatever drugs” Parr claimed he did, and the station then parted ways with her and buried her rant behind a paywall), and host Aaron Goldhammer eating literal horse poop on air as part of a Baker Mayfield bet. But the most-regularly-appearing ESPN Cleveland figure in our archives is Tony Grossi.

While most ESPN [City] radio stations have only loose ties to ESPN (usually, they’re owned by a different corporation and feature their own local programming, with the ESPN branding and affiliation mostly being about picking up syndicated ESPN Radio shows outside of local programming hours), that’s not entirely the case with ESPN Cleveland and Grossi. Grossi in particular is interesting, because actual ESPN.com has run many columns from him over the years (although apparently not since 2019). That’s despite him being someone who accused ESPN.com colleague Bill Barnwell of secretly running the Browns (no, they’d be better-run if that was the case) and asked Browns’ QB Baker Mayfield “the dumbest question you could ask.” And since that last 2019 column on ESPN.com, Grossi earned a suspension from that radio station (yes, such a thing is apparently possible) for calling Mayfield a “fucking midget” (he thought he was off-air, but still); when he returned a few weeks later, he assigned at least partial blame for that comment to the Browns being bad.  Well, Grossi is back in the news again, and this time, it was Browns’ head coach Kevin Stefanski who decided not to answer a question from him following the Browns’ 41-16 win over the Bengals Sunday:

I’m not addressing that Tony pic.twitter.com/JgZJuaUx4e

For the record, the question appears to be “Kevin, is this proof Odell [Beckham Jr., recently released] was the problem to the offense?” (no, that’s not how the English language works; that should be “with”), and Stefanski smiles, shakes his head, and says “I’m not addressing that, Tony.”

This did not stop Grossi from writing a “Baker Mayfield Conquers The Ghost Of Odell Beckham Jr. In 41-16 Rout Of Bengals” piece (it’s nice of him to take time out of his Mayfield-bashing for some Beckham-bashing), which you can read on the ESPN Cleveland “TheLandOnDemand” site for the low, low price of $8 a month or $85 a year (more than the $7 a month ESPN+ costs). We’re not spending $8 a month to read Tony Grossi, so we’ll leave it to anyone who is to determine the merits of that column. But it does seem quite funny that Stefanski just completely declined to take on this question. And honestly, that’s probably the best possible response to this particular inquiry, and perhaps to Grossi in general.