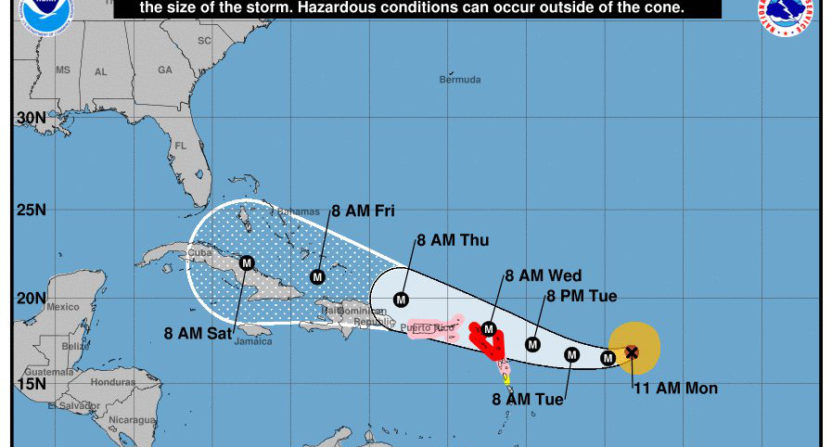 The Miami Dolphins’ season opener against the Tampa Bay Buccaneers could be moved to a different date or city thanks to the approach of Hurricane Irma, and that could lead to broadcast changes as well. Current forecasts have the hurricane’s outer edges hitting South Florida Sunday, which could cause problems for the game, slated for the Hard Rock Stadium in Miami Gardens at 1 p.m. that day. Adam H. Beasley of The Miami Herald has more on what options Dolphins’ officials are considering:

Forecasts this far out are still unreliable, so the teams, the NFL and government officials have the benefit of time before making a decision to either move the game up a few days, move it back or postpone it. Both the Buccaneers and Dolphins have a bye on Nov. 18, but the NFL typically does not want teams playing 16 straight weeks, which both teams would do if the game is moved to that date.

Instead, finding a day in the next week would seem to be more likely. Another, less likely option is moving the game to another city.

…If Sunday’s game is going to be moved, that call will probably have to be made by Wednesday morning, because of the logistics involved.

Hard Rock Stadium, which in recent years underwent a half-billion renovation project, is built to withstand a Category 4 hurricane. But even if it isn’t hit directly, there are a number of other issues that could determine when the game will be played. Most notably: staffing a game with local police and over 1,000 game-day employees.

Moving the game up to Friday might make the most sense, and there have been some cases of that in the past with the Dolphins changing game dates to avoid storms. They moved a game against the Titans from Sunday to Saturday in 2004, and one against the Chiefs from Sunday to Friday in 2005. (A game last year was also considered for potential relocation before a storm turned away.) Beasley’s Herald colleagues Barry Jackson and Armando Salguero provided some further details on Twitter:

I'm told neither the Dolphins nor the Bucs would want Sunday game postponed to shared bye week Nov. 19. Told NFL as much.

Decision on Sunday's Dolphins-TB game figures to come Tues or Wed. There is precedent to moving hurricane-impacted game to Fri.We'll see.

For those asking: Last time a Dolphins game was moved to Fri. for a hurricane (Fins-KC in 2005),game was aired only on CBS affil.in S.Fla&KC

..So NFL,Fox (& DirecTV with regard to Sunday Ticket) would need to decide whether to take same or different approach 12 yrs later if needed

If the game is in fact moved to Friday, a national broadcast of it might have extra appeal, especially considering that this is Week 1. The NFL season kicks off Thursday with the Chiefs against the Patriots, but then there’s nothing until Sunday. That would require some short-notice changes of broadcasting schedules, which isn’t always easy, but if there’s a way to show this game nationally, it might get a decent audience. Broadcasting obviously isn’t the major concern here, but it’s something else that will be impacted by any decision.

A Friday game would still be unfortunate for the teams given the logistics involved. However, it might be the best option they have, and it’s easier to do it as the first game in the season (no one’s coming off a short week). We’ll see what happens here.