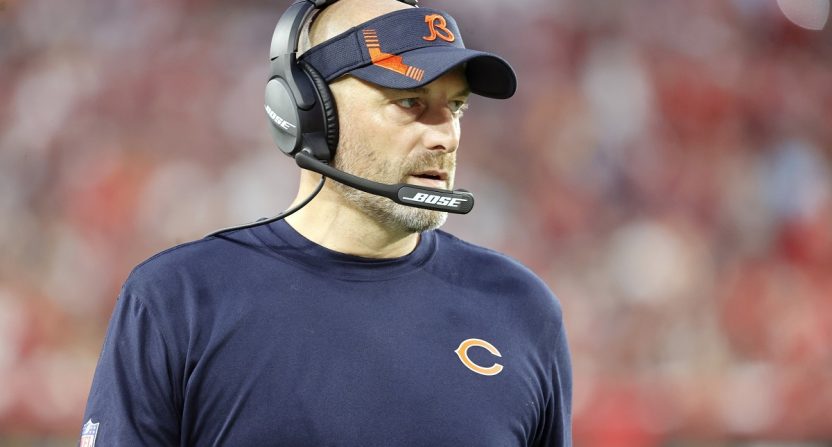 A report today from a longtime Chicago journalist sent the NFL media world into a brief frenzy.

In it, Mark Konkol wrote that a “top source” told him Chicago Bears head coach Matt Nagy had already been informed of his firing, and that the Thanksgiving contest against the Detroit Lions would be his final game with the team.

There were immediate reasons to be skeptical here. Konkol is obviously a legitimate reporter; he won a Pulitzer at the Sun-Times for his local work. But writing now at a hyperlocal outlet, he’s not the sort of person you’d expect to break this kind of NFL news. Obviously not every big story comes from the national media, but a lot of them do, and no one confirmed Konkol’s scoop. Nor did any of the current Chicago sports media.

And the story itself is odd; the Bears season is spiraling, yes, and there have been multiple reports since Sunday’s embarrassing loss to the Ravens (without Lamar Jackson) that suggested the locker room has been lost. All of that might be true, but none of the usual signals have been there to suggest Nagy would be gone midseason. For one thing, his immediate superior, general manager Ryan Pace, is also probably feeling some heat. (Or at least he should be, after seven seasons in charge of an NFL team with no playoff wins, an old and expensive roster, plenty of questionable personnel decisions, and his handpicked head coach failing.)

Unless this was an ownership level move, then, it’s hard to see who would have fired Nagy in the first place. The idea that Nagy would be told he was gone but then given a few more days in charge is also pretty hard to imagine. Had the team simply come out with a one-sentence denial statement, the whole thing could have been cut off early.

That denial never came, though. Bears coaches were scheduled to speak to the media today, and still nothing, which meant that while the story took off on Twitter (with outlets like Pro Football Talk writing about the report, albeit with some skepticism) the Bears organization sent special teams coach Chris Tabor out in front of a media room where the first question was going to very obviously have nothing to do with special teams.

Here’s what he said. pic.twitter.com/3VM636halV

#Bears special teams coordinator Chris Tabor is meeting the media at his regularly scheduled time, forced to address the report that Matt Nagy has already been informed of his firing:

"I don't know anything about that report."

The Bears had a couple of hours to come up with a better plan than this one, and yet there was poor Chris Tabor (who coached a game this season when Nagy was out with Covid), up on the podium being asked about his boss’s job status.

Almost anything would have been better than this. The quick denial statement, released in Twitter graphic form. Rearranging the order of pressers so Tabor wasn’t out first. Pace himself could have stepped in front of the media here and acted as a shield, though that would require a capacity for accountability and competence that Pace has never demonstrated. (Also it would have meant talking to the media at all, something Pace usually does about twice per year.) After Tabor left, the Bears still didn’t do anything, which meant they sent Nagy himself up to the podium to deny a report of his own firing.

Bears head coach Matt Nagy asked about the report that he’s been told this will be his last game as head coach: “That is not accurate."

Think about how poorly you have to manage a media situation to get to the point that your head coach has to answer that question at a routine weekly press conference. There are only two real possibilities here. Either the Bears as an organization were either so out of touch that they didn’t even know this report was widely circulating and that coaches were clearly going to be asked about it, or they knew exactly what was going to happen and let it play out anyway. The only middle ground option is that they assumed releasing some kind of statement would just highlight the report, but if that’s the case it’s another big sign the team really has no idea how media works in 2021.

Bears fans want Nagy out, and Pace should go too. It’s just hard to be confident in any team making the right decisions on hires that important going forward when they can’t even put out a pretty small media fire today without tripping all over themselves.