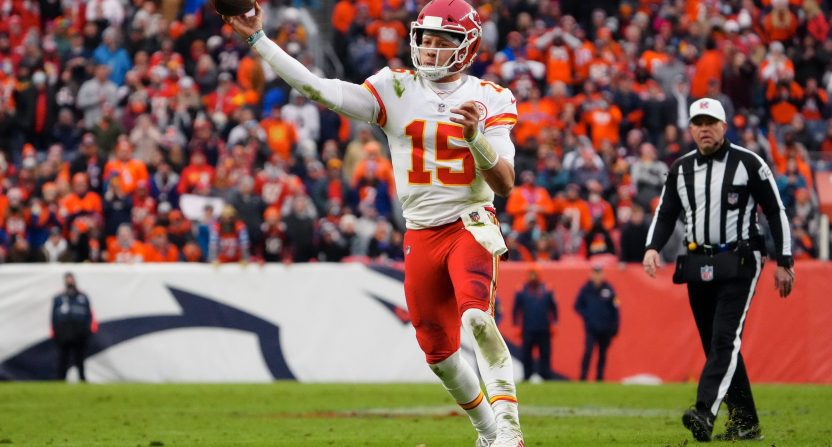 The NFL playoff field is set, and the start times and network assignments for this year’s edition of Wild Card Weekend are all set.

This year, there are six games, with two on Saturday, three on Sunday, and one on Monday night. CBS has a pair of games (with one being simulcast on Nickelodeon), NBC has two, Fox has one, and ESPN has one (which will air across a variety of networks).

Here’s the schedule. All times Eastern.

To me, the big winner from the Wild Card Weekend assignments is CBS. They get the late afternoon window on Sunday, and they get a dynamite, nostalgia-driven matchup in that slot. Patriots-Bills in primetime on Saturday is also a good get. NBC did okay – Raiders-Bengals seemed destined for that first slot on Saturday (the good ol’ NFL Network window that almost always seemed to feature the Bengals or Texans), and Steelers-Chiefs should draw a strong audience in primetime on Sunday. Fox will also be just fine with another Tom Brady game on Sunday.

If there’s a loser, its probably ESPN. Cardinals-Rams should be a fun, exciting game, but that start time for a pair of west coast teams is suboptimal. At least it’s a holiday (and a whole lot of people are still working from home, anyway).

While broadcaster assignments still haven’t been announced by the networks (aside from Nickelodeon’s simulcast), we can make some reasonable assumptions based on last year’s assignments. The trio of Steve Levy, Brian Griese, and Louis Riddick should have the call of the Monday night game, with a ManningCast on ESPN2 and possibly other MegaCast options on other networks. I would fully expect Joe Buck and Troy Aikman to get the call of Fox’s sole game. Jim Nantz and Tony Romo will call one CBS game (which will most assuredly be 49ers-Cowboys), and I’m assuming that Ian Eagle and Charles Davis will get the other (probably Patriots-Bills). Al Michaels and Cris Collinsworth should call Steelers-Chiefs, and Raiders-Bengals will likely have Mike Tirico on the call with either Tony Dungy or Drew Brees. We’ll have the full assignments later this week.