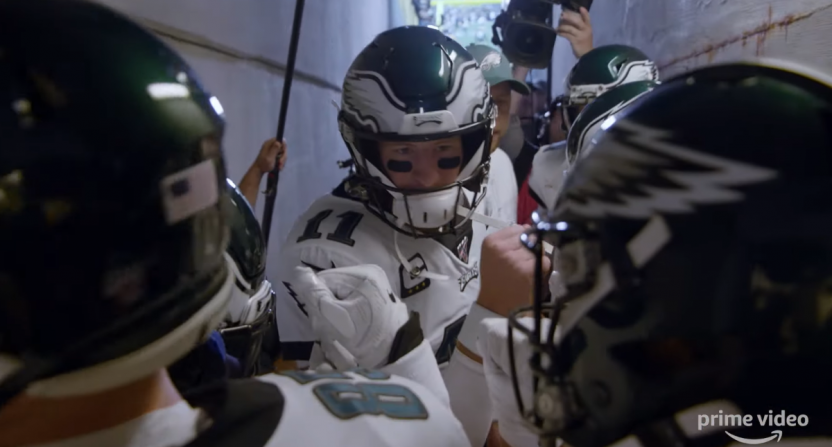 Amazon’s All or Nothing documentary productions have been some of the most in-depth looks ever at teams from various sports across the globe.

We learned in October that this year’s English football team documentary features Tottenham, while the American football series will focus on the Philadelphia Eagles. Today, we got our first look at the Eagles version thanks to a brief teaser trailer, along with a premiere date: February 7th.

The Eagles season will be a fun one to watch, even though we know it ends with a dispiriting 17-9 home playoff loss to the Seahawks. The journey to the postseason was certainly eventful, though, coming all the way down to the final week of the season.

The Eagles, perhaps unsurprisingly, didn’t volunteer to be the featured team.

From the Philadelphia Inquirer:

The Eagles aren’t crazy about the idea of being on the all-access show. But they didn’t have a choice in the matter. They got a call from the league shortly before the start of the season, informing them that they had drawn the short straw.

“There has to be somebody on the show,’’ Eagles president Don Smolenski said. “And if there are no volunteers, then the league makes a selection.”

“There’s a certain criteria – I don’t remember all of the criteria – for those teams that cannot be chosen. And if you don’t fit that criteria, your name goes into a bucket with a group of other teams, and the league picks from the bucket.’’

That same Inquirer piece offered some insight on All or Nothing‘s production, which is notably less intense than Hard Knocks.

All Or Nothing isn’t quite as intrusive as Hard Knocks. There are more than 30 producers, camera and sound people on-site during the production of Hard Knocks each summer.

On a given day, the All Or Nothing crew at NovaCare typically has no more than five people. And given the regular army of reporters and cameras that are out there every day, they blend in pretty easily.

“For us, the media is around every day,’’ Smolenski said. “There’s media here at practice. There are press conferences almost every day. There’s cameras all around. So, in many ways, it’s nothing more in this marketplace than what our players are used to.’’

A lot of Eagles fans, players, and executives might not want to relive the season, but there will be plenty of interested people watching in February.