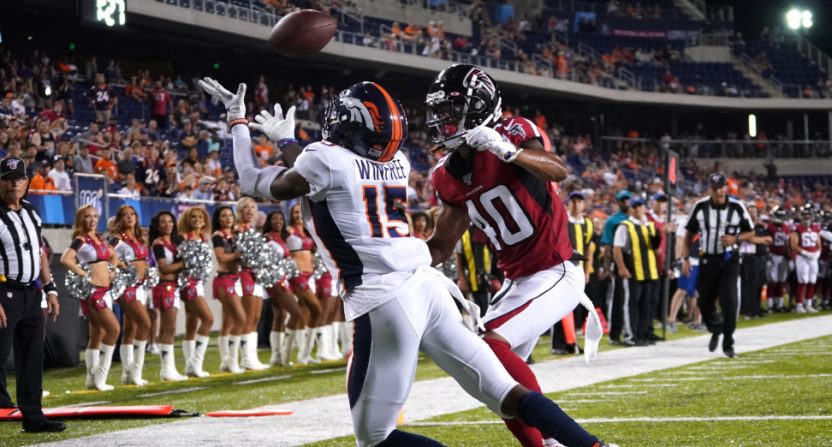 The NFL’s preseason kickoff Pro Football Hall of Fame Game has produced some interesting moments over the years, from Tony Romo and Jim Nantz practicing their announcing in a deer stand to a Collinsworth Slide notable by its absence. But the Denver Broncos’ 14-10 win over the Atlanta Falcons in the 2019 edition Thursday didn’t exactly draw a lot of viewer interest, with John Ourand of Sports Business Journal reporting Friday afternoon that it was down 21 percent year over year in viewership:

As Paulsen wrote earlier Friday afternoon at Sports Media Watch, the overnight ratings were also down (although by a smaller percentage), and were historically low:

Denver led all markets for the game with an 18.9 rating. The market also delivered a 36 share, meaning that more than a third of TVs in use were tuned to preseason football. After ranking dead last among markets for the Super Bowl, New Orleans ranked second for the Hall of Fame Game with a 10.5 rating — still down 11% from last year (11.8).

That ratings drop isn’t great news for NBC or the NFL, especially as the Hall of Fame Game ratings last year were “the lowest on broadcast television in 20 years.” However, it isn’t necessarily an indication that regular season ratings will see a similar drop; there are plenty of potential factors that go into a Hall of Fame Game rating, from interest in the specific teams playing (“Aww,  the Denver Broncos?”) to how exciting the game is (in the NFL preseason in particular, many check out if it’s low-scoring early on, and this was just 7-7 at halftime). Last year’s 17-16 Ravens win wasn’t an offensive showcase either, though, so poor offensive performances here may not account for the whole ratings drop.

At any rate, we’ll see how ratings go for the NFL this season. The league saw its regular-season ratings up five percent year over year in 2018 across all windows, but that was a rebound over incredible lows in in 2017. And this year’s Super Bowl brought in the lowest ratings since 2019. So we’ll see if we get a further rebound based on last year’s regular season, or a further drop based off how the Super Bowl performed. And while the Hall of Fame Game ratings don’t necessarily mean too much (and are still quite good by the overall standards of sporting events), they’re certainly not evidence that there’s a NFL ratings resurgence coming.