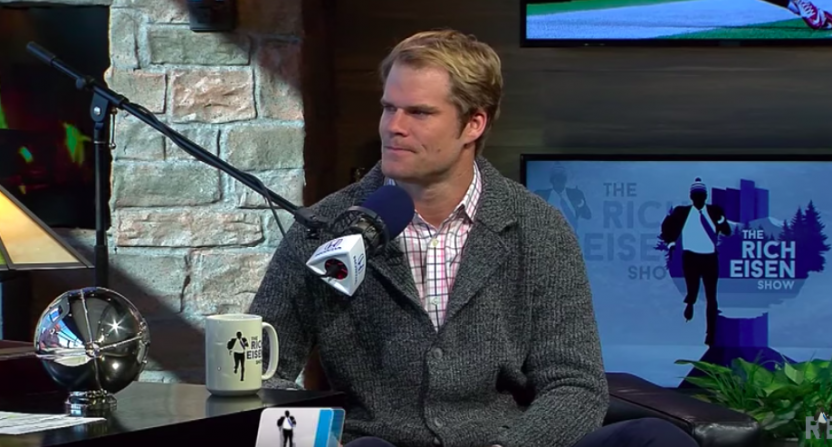 In a few short years, Greg Olsen has gone from being a solid contributor to Fox’s NFL broadcast team to the analyst who will be part of their Super Bowl booth this year. The former NFL star was long considered for the broadcast booth and it always seemed like a matter of time before he transitioned into a media career. However, even Olsen couldn’t have predicted that when he was younger.

“Until I started doing it, I don’t even really know if I ever paid attention to broadcasters,” Olsen said on the most recent episode of The Dave Pasch Podcast. “You know, I knew who Monday Night Football announcers were as a kid. Dan Dierdorf and Frank Gifford and Al Michaels. You remember listening to games with John Madden. I remember them, I can’t say I ever tuned into a game wondering ‘Hey I wonder who is calling the game?’ It was always kind of secondary to me.”

Olsen said that once he started to get opportunities to work in the media space, that kickstarted his interest and even changed the way he watched football.

“It really wasn’t until later into my career and I’d been on that other side of the camera and sat in those booths and called it, where I would watch games and almost watch it more to hear what they were saying and more to see the replay sequence and more to see how the analyst used the telestrator and what points he made. And what I found interesting and what I found boring,” said Olsen.

Olsen finds himself on Fox’s A-team in part because of the Great Football Announcer Reshuffling of 2022. Just like that, Joe Buck and Troy Aikman were gone from Fox, which left a massive void in the network’s Super Bowl coverage. After some rumormongering, it was announced that Olsen would join Kevin Burkhardt in the Super Bowl LVII booth. All the while as reports and rumors swirled, Olsen says he was able to rely on the advice of the analyst he’ll be replacing in that spot.

“When I was getting ready to do my audition, Troy Aikman was really cool,” said Olsen. “I was able to connect with him and he gave me some really good pointers. And then, through the years, both being at Fox, and then this past year with all this kind of musical chairs and guys moving and shaking, he was really cool. He reached out to me. He gave me great advice. He helped me kinda navigate the uncertainty of what was going on.”

The Fox analyst said that he also garnered some great career advice from CBS analyst Tony Romo, who was in a similar spot when he shifted from the football field to the football booth.

“When I was making a decision even prior to retiring two years ago, I had some opportunities to go to TV and was weighing it,” said Olsen. “I was able to chat with [Tony] Romo about just what that transition was like. Did you miss the game? He gave me some really cool insight into how he dealt with retiring relatively soon to go full throttle into TV.”

Even though he’s received a lot of advice from those who came before him, Olsen says he remains committed to doing his own thing during NFL broadcasts. And if you don’t like what he does, well, that’s fine by him.

“I’ve been fortunate to have some good guidance and have some cool conversations. But as far as style, I don’t try to be anyone,” said Olsen. “There’s not anyone where I say, oh, I want to sound like him. I just kinda talk like me and say things that I think are interesting and try to point out elements of the game that I find fun. It might not be for everyone. Some people might not like my style. They might not like the way I describe things. But I think it’s fun. I think it’s interesting. I think, our broadcast, you come away learning the game of football. I like that. I want that to be what people are tuning in for.

“Some people don’t want to learn. Some people just want to be talked down to and that’s not my style. I think the game is so fun and so interesting and complex and the better we can do as analysts in portraying that, I think its fun for the viewer to come away and learn a few things throughout the course of the game.”