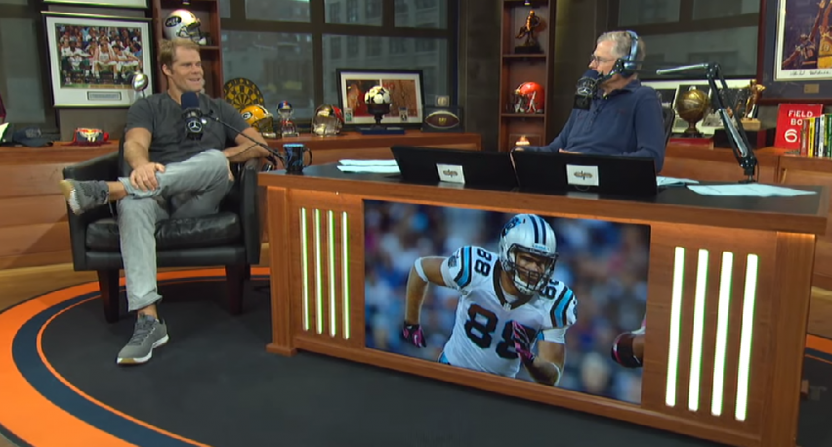 Carolina Panthers tight end Greg Olsen is having a solid season, with two touchdowns and 22 receptions through six games. Olsen is also 34 and coming off of two years where he played a total of only 18 games, he’s clearly aware that no playing career lasts forever.

Olsen has worked as a broadcaster already, doing work for FOX as a game analyst while injured in 2017 (which angered some people around the league) and working as a Super Bowl analyst for ESPN this past season. Olsen clearly has a future in broadcasting when he wants it, and considering the toll thirteen years and counting takes on an NFL player, it’s clear that day is coming.

On The Dan Patrick Show, Olsen was asked when he knows it will be time. In short: it depends on the job.

PATRICK: At what point do I say, do I get out early? If a good job opportunity comes along, like Jason Witten had Monday Night Football. He wasn’t ready for it, but he did get that opportunity. Those jobs don’t come along…have you talked to your wife about that scenario of is there a job, and when do I take that job and then quit playing football?

OLSEN: First and foremost, if you’re on the fence at all about playing, you probably shouldn’t play. In order to play and continue to play at a high level, you have to be all in. Up to this point for the most part I have been. I’ve had some injury issues, and any time you’re injured and on the shelf, you ask yourself do I want to continue to rehab, do I want to continue to go through this now the third year in a row. And the answer is yes.

To your point, the last couple years we did have some different TV offers and opportunities come along, but they weren’t the right opportunities. It wasn’t something I just couldn’t turn down because it might never come again…Jason and Monday Night Football, that’s one of those jobs that if that’s put in front of you, even if you think you still want to play, you have to at least think it through. Because you might never have that opportunity given to you again.

Olsen’s outlook probably matches most players in his situation: as long as he feels like he can play at a high level, he wants to keep playing. He does leave the door open for a high-profile job like Monday Night Football, for which he auditioned in 2018 before ESPN hired Witten. Obviously that’s a job that could very well be open again at some point in the near future, though the lead analyst roles at other networks seems fairly solidly filled for the time being.

Of course, Olsen’s calculus could change after this season, in either direction, depending on how things go on the field. In his case, though, it’s clearly just a matter of time before he makes the transition to the booth.