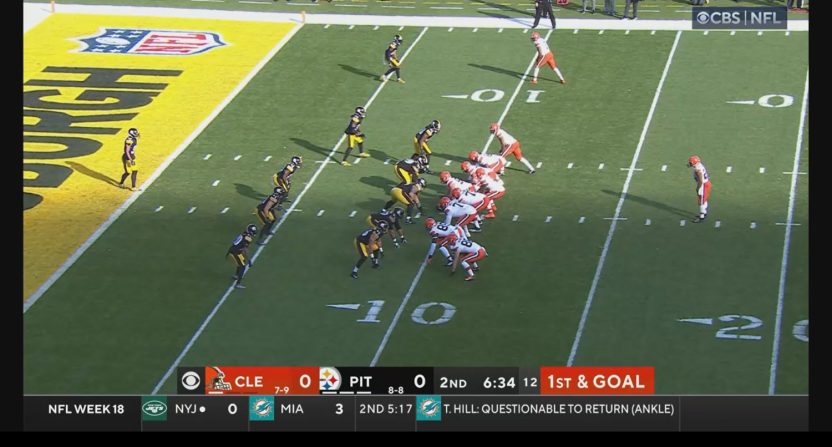 On the field, Greg Gumbel’s Week 18 NFL assignment had playoff implications, but in the booth, the renowned sportscaster sounded like he was still shaking off some preseason rust.

With Cleveland lined up on Pittsburgh’s 10-yard line, analyst Adam Archuleta told the audience that Browns quarterback Deshaun Watson was lined up on the 10-yard line. Despite being reminded that Watson was under center, Gumbel called the play as if Jacoby Brissett was playing quarterback for the Browns. Brissett had not started a game for the Cleveland Browns since Nov. 27.

“Brissett,” Gumbel said. “Still with the ball. Now throws, inside the five. To the end zone.”

As the Browns lined up for an extra point attempt, Gumbel added that “Njoku never stepped over the goal line, but stuck the football across the plane.” Gumbel, meanwhile, never even said the word “touchdown.”

The touchdown call, or lack thereof, by Gumbel was extra jarring because of his quarterback stumble, mixing up Watson and Brissett. Just last month, Gumbel was on the call for Pittsburgh’s matchup with the Carolina Panthers and the iconic sportscaster kept mistakenly referring to Steelers quarterback Mitch Trubisky as Sam Darnold.

Sunday afternoon, however, it wasn’t just the quarterback misstep that made this one of the worst touchdown calls in NFL history. The call was choppy, unenthused and desolate. Gumbel’s a great sportscaster with a legendary resume, but he appeared to finish the 2022 NFL season without his fastball.