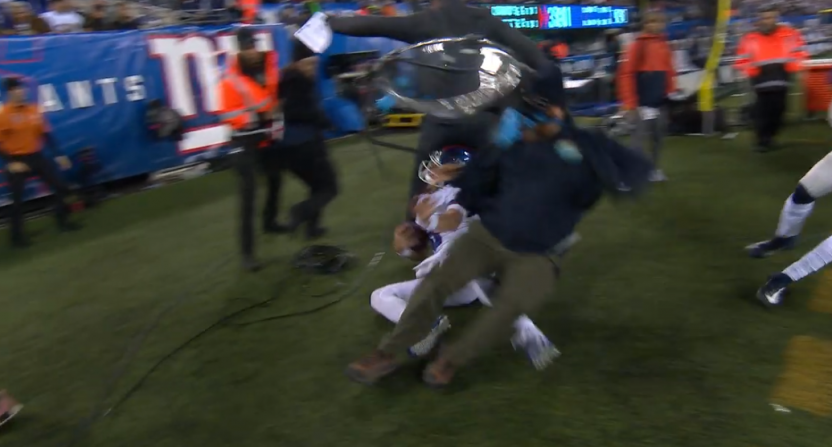 Tonight’s Giants-Cowboys Monday Night Football matchup has already provided us Kevin Harlan’s call of a cat on the field. That’s probably more than we deserve, but later in the game we also saw the latest example of why working the sidelines in any capacity can be hazardous.

With about three minutes remaining in the third quarter, Giants quarterback Daniel Jones scrambled to the sideline where he was forced out by Cowboys safety Xavier Woods. The contact came in bounds, but the force of the push combined with the momentum of the run sent Jones into a sideline mic tech, who couldn’t quite react fast enough to avoid the blow.

The mic dish slowly rolling away is a fantastic visual. Here’s a cleaner look at the hit sustained by the audio tech:

Parabolic mic guy has to bail way earlier on this play. Don’t be a hero. pic.twitter.com/JrLbS9nD6j

And another angle as well:

The awkward result and the collision with the audio man ended up making the clean play look dirty, and resulted in some pushing and shoving along the sideline, which drew flags. The game itself featured plenty of chippy moments and pushing and shoving, but the poor sound guy may have taken the worst hit of them all.

It was reminiscent of this play from Indiana’s win over Nebraska last weekend, though the college version was arguably even more violent and included the active audio, as well:

It’s probably pretty hard to dodge suddenly incoming NFL players even without being tethered to a saucer sled and microphone equipment, so maybe it’s surprising this kind of collision doesn’t happen more often.