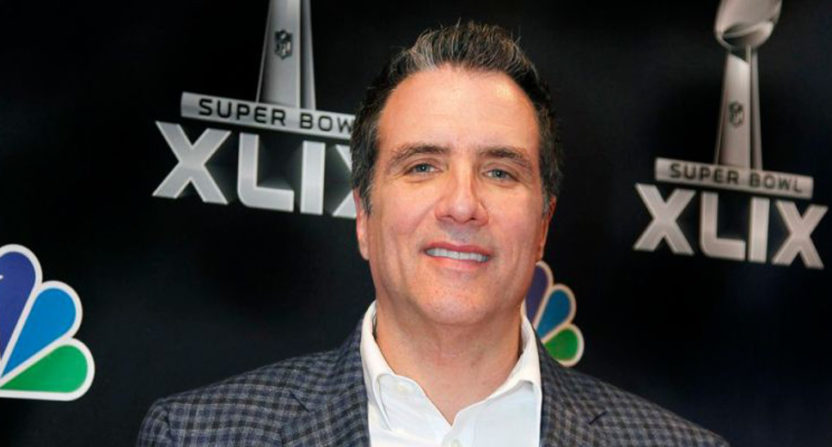 For 33 years, Fred Gaudelli has been producing primetime NFL games. He’s worked for ESPN, ABC, NBC, and now Amazon (he led Amazon’s efforts this season, while still contributing to NBC’s efforts). And he’s now going to shift into an executive producer role for both Amazon and NBC, which will see him exit the truck. As Peter King relates at NBC Sports, Gaudelli (seen above at Super Bowl XLIX in 2018) produced his last regular-season game from the truck Thursday (Amazon’s final broadcast of this season), and has one more game left in a truck (one of NBC’s two wild-card games in two weeks).

.@peter_king mentions that @NBCSNF will no longer produce games after NFL Wild Card Weekend. He'll become Executive Producer full-time after this season. Fred Gaudelli is one of the best producers in sports television. He was on Sunday Night Football for ESPN, then MNF, and moved

Here’s more from King’s Football Morning In America column on the influence Gaudelli (who has won 24 Emmys and produced seven Super Bowls) has had, featuring a notable tribute from NFL commissioner Roger Goodell (who spent 20 minutes praising Gaudelli to King on New Year’s Eve):

“Freddie’s been the ultimate coach in the truck, calling all the plays for years,” Commissioner Goodell told me Saturday. “I have so much respect for him for a few reasons. One is just his constant desire to improve the experience for the fans. He constantly was looking to see what could we do differently. He surrounded himself with people who were innovative and he pushed them to be innovative. He wasn’t afraid to take a chance. I remember when we were talking to [NBC’s] Dick Ebersol about starting Sunday Night Football, Freddie’s name was one of the first he mentioned. Dick really wanted him. Matter of fact, I think it might’ve been before [John] Madden.”

…To Goodell, in 2022, one person was best suited to usher in a new media product and the streaming principle: Gaudelli.

With cable and satellite TV in decline, Goodell knew how important year one of Amazon was. “Streaming,” he told me, “really had to be done. I’ve often said I think it’ll change the way people watch football. There are all kinds of elements with that launch. But the production was one where for credibility purposes, we knew that it had to be true — that’s the best way to put it for me. It had to be when NFL fans watched, they said, ‘Wow, this is great. This is a first-rate experience.’

“So, going into the season, Amazon was maybe the highest priority from a media standpoint for us — making sure that launched properly. Knowing that Freddie was in the seat…that part of the launch was not a concern of mine. It was comfort. I knew he knew what to do, how to do it and I knew he was going to produce a fantastic product for our fans. That was really one of the most significant things for me in discussions with Amazon even before the deal was over.”

Getting Gaudelli was huge on Amazon’s side as well, as vice president of global sports video Marie Donoghue told media in an August conference call:

“We’ve had to build a team behind of and in front of the camera. I think the success we’ve had building a team behind the scenes led us to these folks we’ve got in front of the camera. …I started at Amazon four years ago, and they always used to ask me, ‘Could we produce a NFL broadcast? Will the NFL let us?’ And I just said ‘If we just could go get our own Fred Gaudelli type, of course we could.’ So I’m thrilled that we got the actual Fred Gaudelli. Fred was the white elephant, I’m glad we landed him, and I’m obviously thrilled to have him and his team come over.”

33 years of producing primetime NFL coverage is a remarkable run, but it takes its toll. Gaudelli told King “These jobs aren’t conducive to great health,” and said that’s why he’s stepping into this new role. And it’s good that he’ll still be involved with a couple of key NFL broadcasts, albeit in a different way. But it’s certainly notable to see him leaving the truck.