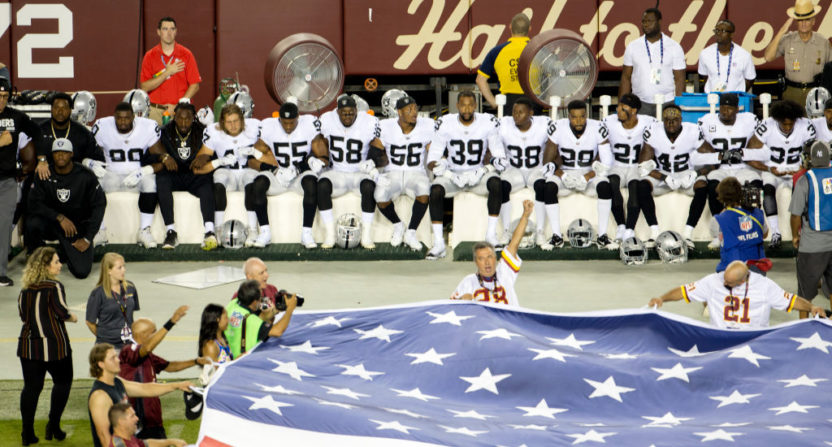 The ongoing debate around NFL players protesting during the national anthem last Sunday has dominated the news cycle not just in sports, but everywhere. It’s been the biggest story in the country the past week, ever since President Trump used an expletive to criticize athletes taking a knee to protest injustice. After Trump inserted himself into the situation in his typically bombastic and unapologetic way, exponentially more players took part in some kind of public display during the anthem.

Last week, Fox and CBS were on top of the story as it transpired, both talking about it at length on their pregame shows and going to the stadiums early to witness how players responded during the anthems instead of taking a commercial break like normal. It was appropriate given how it transcended the league into the social fabric at large.

Given the way the story has continued to be in the headlines throughout the week, it’s a surprise to see that Fox Sports President Eric Shanks says his network is going to be back to business as normal this week. He says that as of now, Fox plans on not showing the national anthem to viewers at home this Sunday.

Fox Sports president Eric Shanks said the network does not plan to show national anthems live at its NFL games on Sunday, the way it did last weekend, when some players took a knee and many executives, coaches and players locked arms before games.

“The standard procedure is not to show them because of the way the commercial format works and the timing of the anthem to get to the kickoff,” Shanks said Tuesday at an event to promote Fox’s soccer coverage of the 2018 World Cup. “So I think we’re going to pay attention to events.

“Who knows what’s going to happen? A lot of time is happening between now and then. But I think the plan would be to get back to a normal schedule. I think that’s where we sit today on a Tuesday . . . It seems like there’s more than 24 hours in a day now, doesn’t there?”

This is curious, to say the least. Given the way the story has continued to develop and evolve, it’s going to be incredibly newsworthy to see what happens and how teams respond to the anthem this week. Will there be even more players taking a knee? More linking arms? More signs of unity? More teams sitting in the locker room? It’s impossible for Fox or any network that has a relationship with the NFL to think that this is purely a one week story.

Perhaps the thought is that Fox wants to get the focus on football so as to not risk alienating fans? We’ve already people respond in emotional and visceral ways by doing things like burning season tickets and jerseys.

Regardless, it’s impossible to go back to a normal schedule now when the NFL and its athletes are in the middle of a culture war with the sitting President of the United States. The anthem will be a huge story this week and likely will be throughout the remainder of the season as well.