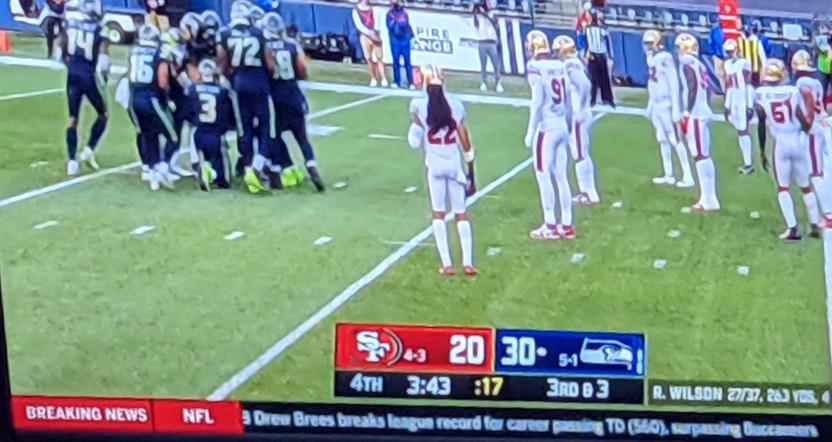 Setting a league record can be a big deal, and it’s understandable why a network would showcase a player setting the all-time NFL record in regular-season touchdown passes. However, the way that Fox decided to do that Sunday for New Orleans Saints’ quarterback Drew Brees took some criticism, especially considering that the player he passed (Tampa Bay Buccaneers’ quarterback Tom Brady) could pass him back the next day (the Bucs play the New York Giants on Monday Night Football).

When Brees threw his second touchdown of the day Sunday (in what would eventually be a 26-23 overtime win over the Chicago Bears) and his 559th regular-season touchdown pass (Brady has 558), Fox went with a big “BREAKING NEWS” on their ticker. And they did that not just in the Saints-Bears game, but also in their other games, including the 49ers-Seahawks one seen above. And that decision took a lot of criticism; here’s some of that.

Breaking News: Drew Brees passes Tom Brady for a Career Passing TD record that Brady will more than likely tie or surpass tomorrow night until Brees plays his next game and passes Brady or Brady passes Brees again and again until one or both retire. pic.twitter.com/cT19MXkis8

FOX has got to be joking. They have a "BREAKING NEWS" graphic that is just saying Drew Brees surpassed Tom Brady on the all-time touchdown passes list. Like they won't go back-and-forth all season.

We don't need a breaking news bar every time Brees and Brady pass each other in passing TDs, @FOXSports.

let’s keep making a huge deal every time one of them passes the other for the rest of their careers https://t.co/wbxLbc7woD

All TV outlets … for the next several days, for be love of sanity, don’t flash a giant BREAKING NEWS thing if Drew Brees threw a pass, or anything like that.

You serious, FOX, with this BREAKING NEWS, about Brees breaking Brady's career record for touchdown passes today? I hope ESPN doesn't stoop to a new low when posting BREAKING NEWS after Brady's second touchdown pass tomorrow night. Jesus, what a low broadcast media has stooped to

How many times do we have to see breaking news that Brees passed Brady for most TDs? Shit, they are both active. Is it going to be back and forth the whole damn season?

And the critics have a point here. Yes, it’s understandable for Fox to include Brees’ accomplishment on the ticker, even in other games. But the “BREAKING NEWS” feels quite unnecessary, and out of proportion to what’s actually happening here, especially with Brady still to play this week. And the real test of this touchdown record is going to be where the two stand at the end of the season.

Of course, that’s not saying that Fox should ignore that this happened. And you never know what’s going to happen going forward; maybe Brady will never regain that lead. But there certainly seems to be a strong chance that he will, and that makes this less BREAKING NEWS and more of an update on where that race currently stands. And a more restrained ticker update without the BREAKING NEWS would have gotten the news across without taking anywhere near as much criticism.

Hopefully ESPN will be a little more calm if Brady takes the record back Monday night. But maybe they won’t. And however they handle it, this may be an interesting angle to keep an eye on this year if Brees and Brady keep going back and forth. Fox’s approach Sunday certainly drew a lot of criticism; we’ll see if they maintain that going forward, and we’ll see how other networks handle it.