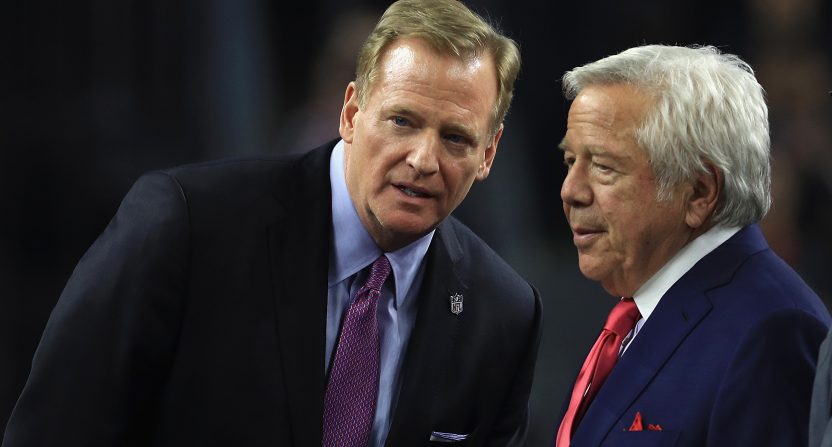 Longtime NFL writer Bart Hubbuch was fired by the New York Post earlier this year after controversial tweets comparing Donald Trump’s inauguration to 9/11 and Pearl Harbor. Hubbuch has resurfaced with a byline at Deadspin of all places with an in-depth story about a story he attempted to report on while at the Post.

It all circles around New England Patriots owner Robert Kraft and whether or not he actually abides by the NFL’s longstanding prohibition on any involvement in profiting from gambling institutions. To make a long story short, Kraft sits on the board of Apollo Global Management, which has a significant investment in Caesar’s Entertainment. And in spite of it appearing to be against the NFL’s strict rules, even a league spokesman says that it’s no big deal because of how big the investment group is and how tiny the investment is compared to the overall portfolios of these millionaires and billionaires.

The truly interesting facet of Hubbuch’s Deadspin story though isn’t so much the details of Kraft’s investments, but what happened to his planned Post expose. Although it was ready to be published in 2015, it was halted dead in its tracks by an editor who Hubbuch claims told him to stop all reporting on the story. Hubbuch goes on to connect these dots – that the story was squashed thanks to Kraft’s friendship with Post owner and media kingpin Rupert Murdoch:

My first and still-lingering thought, fortified by later conversations with some old Post hands, is that Kraft—or his people—had gotten the story quashed by calling Rupert Murdoch, executive chairman of both News Corp (which owns the Post), and 21st Century Fox (which owns the Fox broadcasting network).

That Kraft and Murdoch are friends is no secret. Kraft has hosted Murdoch in the owners box at Patriots home games several times, including as recently as last season.

Kraft had once made it quite clear to me that he and my biggest boss were tight. It was 2010, and I was in Foxboro to cover the start of Patriots training camp in my first year on the NFL beat for the Post. Kraft summoned me to his office inside Gillette Stadium, where he promised me scoops about his team and the league because he was such good friends with “Rupert.” Those scoops unfortunately never materialized (I believe because I went on to become a vocal critic of the Patriots’ relentless rule-breaking and the favoritism shown them by the league), but Kraft had made his point.

Kraft and Murdoch are corporate partners, too. Fox now pays the NFL an estimated $1.1 billion annually on a TV deal that runs through the 2022 season, and infallibly reaps the highest Nielsen ratings in America and commands among the highest prices from advertisers. Kraft is the chairman of the NFL’s Broadcast Committee, the small group of owners that negotiates the TV contracts with network heads. If the timeline of the last contracts is a guide, expect the NFL to sign its new TV deals within the next three years, which means negotiations are soon to begin.

The fact that Hubbuch would be investigating Kraft isn’t a shock. He’s been notoriously critical of the franchise and been involved in some pretty notable feuds with pretty much everyone on Boston sports Twitter. And while this story isn’t going to cause any breaking news alerts, it is a great example of the league’s complex, arbitrary, and hypocritical policies about gambling (or fill in a number of other things). If you’re not going to abide by your own rules, or say they don’t matter, why even bother having them?

For what it’s worth, Deadspin published a denial from Patriots PR that denied any involvement Kraft had in making sure the story didn’t see the light of day. Although the insinuation might not be provable, Hubbuch does make a decent case for Murdoch becoming personally involved in the story given his friendship with Kraft and his own investment in the NFL given Fox’s billion dollar paycheck to the league. As much as the common NFL fan might look at this story and go “so what, who cares” the reaction from Roger Goodell and other millionaires and billionaires around the NFL might be quite different. No wonder there is so much confusion about where the NFL actually stands on this issue nowadays with a team on its way to Las Vegas.

When it comes to Hubbuch and Kraft, of course there’s bound to be conflicts of interest when rich mega-moguls have their fingers on so many buttons. Murdoch is already paying his friend Kraft millions in rights deals so he might not be too intent on serious investigative reporting that would call his investments or NFL rules into question. If anything, Hubbuch’s story shows the rich and the powerful are usually out to protect the rich and the powerful.