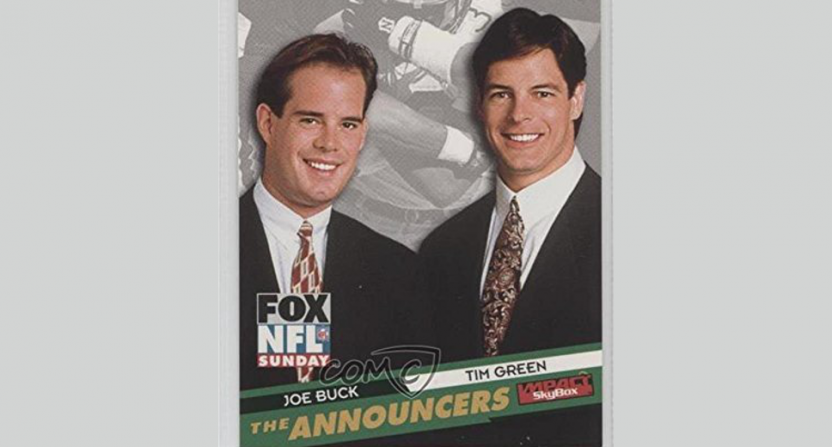 There’s a big struggle ahead for former NFL on Fox analyst Tim Green. Green, a first-round pick out of Syracuse in 1986, played defensive end/linebacker for the Atlanta Falcons from 1986-93 and then called games on Fox from the beginnings of the NFL on Fox in 1994 through 2005, working alongside Joe Buck, Kenny Albert, Sam Rosen, Drew Goodman, Curt Menefee, Dan Miller, Ron Pitts, Thom Brennaman, and Matt Vasgersian. He’s also worked as a NPR commentator, a TV host of news, sports and reality programs, a commentator on some Falcons’ pre-season games, a prolific author of both fiction and non-fiction (including many sports books), and a lawyer.

But he announced on his Facebook page Wednesday night that he has been diagnosed with amyotrophic lateral sclerosis, or ALS:

Green says in that post that he has “a slow-progressing version of the disease,” and that he has one of the top ALS specialists in the world, Dr. Merit Cudkowicz at Massachusetts General Hospital, as his doctor. But he also makes it clear that he wants to use this diagnosis to advance fundraising for ALS research and treatment, and he already has a 60 Minutes appearance planned Sunday to discuss that.

ALS research is grossly underfunded and together, with friends like you, we can make a huge difference to those with the disease and those who will have it in the future.

…For the complete story, tune in this Sunday, 11/18, at 7pm to watch 60 Minutes. Please share this post to help raise awareness and learn about the fundraiser I am doing to help Tackle ALS in the episode! On Sunday the fundraiser will go live! Don’t be sorry, let’s beat this!

Tim Green’s revelation of ALS is heartbreaking. Always prepared with good humor, I think of him w/UGA Wrestling legend Bill Goldberg—as the 3 of us did a Falcons game in Jacksonville. It was unbelievably fun. @11AliveSports pic.twitter.com/VzmMEFCvgv

You may remember him from his playing or NFL broadcasting days. I know Tim from having worked with him and done numerous stories with him. He’s got achievements most men dream of but never fulfill. ALS just ran into one hell of a fighter. https://t.co/vCaIGfmlXJ

Green joins the ranks of former NFL players and broadcasters who have faced ALS, which stretched to at least 17 earlier this year, from Steve Gleason to O.J. Brigance to Dwight Clark. And there have been a lot in the CFL too, with at least eight of the league’s around 15,000 former players diagnosed with the disease by 2008. A 2012 U.S. study found retired NFL players were four times more likely to die from ALS than the general U.S. population, which at that time had five cases per 100,000 people, and connections to chronic traumatic encephalopathy (CTE) have been found.

Questions remain about the specific links between football, head trauma, and ALS (and in some cases, like that of Kevin Turner, it’s actually been CTE affecting players rather than ALS), but the numbers of former players who have wound up with ALS are certainly remarkable. And as Chris Nowinski of the Concussion Legacy Foundation noted, they keep rising:

Former Syracuse football legend & #NFL star Tim Green announces he has #ALS.
Sadly, more former #NFL players have been discovered to have #ALS in the last few years than was projected over the entire 60 years covered by the NFL concussion settlement.https://t.co/PnJ2OOdRTb

And it sounds like Green sees a link there too. Nate Mink of The Syracuse Post-Standard interviewed 60 Minutes correspondent Steve Kroft, another Syracuse grad, and got a preview of his interview with Green that will air on 60 Minutes Sunday:

Green and his family were interviewed last month at his Skaneateles home by Steve Kroft, a Syracuse University graduate who had worked with Green in the past on a 1996 piece for 60 Minutes around the release of his best-selling book, “The Dark Side of the Game.”

Sunday’s show will include audio from that 1996 piece, according to 60 Minutes, when he discussed the occupational hazards of football and how he loved the game too much to quit playing, even as he suspected it might take decades off his life.

…”Those dots are pretty well-connected by him,” said Kroft, the 60 Minutes correspondent.

But Kroft added that Green said he “doesn’t have any regrets,” and that he thinks the NFL has significantly improved safety policies since his playing days:

“He says the NFL has made [football] a lot safer and that he thinks if he started playing the game later, under these new conditions, he wouldn’t be fighting for his life.”

This is a tough diagnosis for Green, as there is no known cure for ALS. And even if the form of ALS he has is slower-progressing, it’s still going to drastically affect his life; he mentions that he’s already had neurological problems with his hands and with his voice. But he says in his Facebook post he’s determined to focus on the time he does have:

As always, I will spend the coming days and years counting the blessings I have instead of pining for the things I don’t. Today I will take a walk. I will work and write and kiss each of my kids as well as my beautiful wife. That’s a great day. As good as it gets…