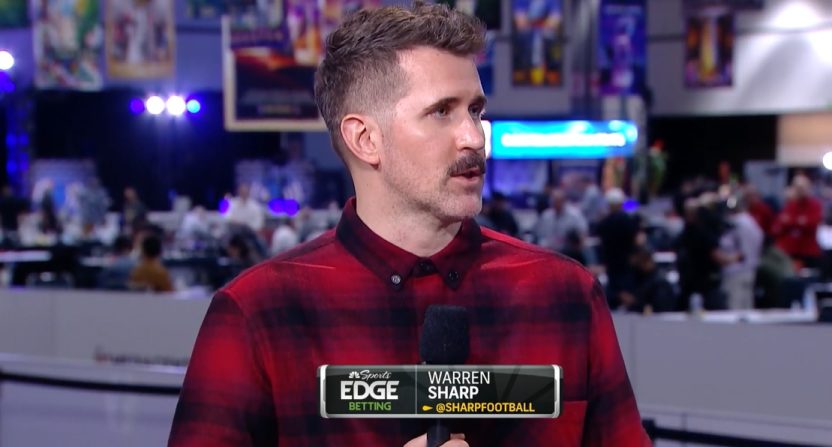 When it comes to doing a deep dive on advanced NFL data, no one is more detailed than Warren Sharp of Sharp Football Analysis. He breaks down football on numerous platforms, including NBC Sports. Sharp spent 15 years as a civil engineer before starting his own business full-time.

Awful Announcing caught up with the stats guru who recently released his annual NFL preview that’s available digitally for purchase.

Why should someone buy your book?

“It’s the fastest way to get smart about this upcoming season. We will share information about every team that you did not know. That will also help you better understand expectations for the team this year and why they didn’t meet the expectations last season.

no way the Cowboys get takeaways like they did last year

and sure enough, when they don’t, wins will fall off too pic.twitter.com/hlypd4U6cc

Based on your analysis, what do most teams fail to realize?

“That the first half is more important than the second half in terms of likelihood of winning. If you have that lead at halftime, opponents in the second half have to play catch up. They have to modify their strategy, particularly on offense, and they become more predictable. The way the rules are written, offenses have the edge over defenses. But the one thing you can do to give the defense back that edge is to be predictable. If you’re predictable on offense, you’re going to give the defense a little bit of an upper hand.”

Is there something else teams should be aware of?

“Third-down avoidance and early-down efficiency. The two go hand in hand. Too many teams like the Seattle Seahawks and New York Giants focus on ‘Let’s try to figure out a way to convert on third down.’ That’s completely wrong. The strategy needs to be ‘How are we going to avoid third down?’ Because when you’re in third down, you become more predictable to the defense. They know what’s coming. On first and second downs, you have a lot more open to your offense.”

Who could be a surprise team like last year’s Cincinnati Bengals?

“The team I’m interested in watching is the Minnesota Vikings because I see a team that was constrained by their prior coaching staff, particularly their offensive play calling and philosophy. They tried running the ball a ton. They were predictable on second down. After a first-down incompletion, they ran the ball at a really high rate. If they allow Kirk Cousins to pass on early downs when the defense might be expecting a run, their receiving corps is pretty good. I think that’s a team in a weaker NFC that could surprise and have success.”

Who could be a breakout star?

“Trey Lance. He’s going to make a big difference for the 49ers. I know a lot of people have question marks about him. But I think with the way Kyle Shanahan crafts this offense, he makes life very easy on the quarterback. He designs an offense that allows the quarterback to make easier throws… We’re also going to have (Lance’s) running ability. That’s going to bring an extra defender down into the box. That’s going to open up things even more in the passing game.”

Do your friends refuse to play fantasy football with you?

“I used to play. I used to love it in college and after college. But I just got so overwhelmed with my workload that I feel like I can’t devote enough time to fantasy. I was consistently making it to the finals and doing well. It wasn’t that they didn’t want me around anymore. It was just that I got a little bit bored with having to commit the time each week when I could be doing other things that could be more beneficial from a financial perspective… Over a 10-year span, I probably won three or four times.”

Have you heard any feedback from players?

“Lamar Jackson has liked several of my tweets. I’ve certainly had players when I’ve written something positive about them, like it or retweet it.”

had his team #1 seed in AFC in early DEC…

despite being the #1 most injured team in history

ranked #1 in the NFL throwing outside the numbers…

& was top-10 in the NFL in rush yds when healthy

and after injury BAL went 0-5

Have fan bases been upset with you?

“I try to be objective, but some people don’t like it when I post negative things. Patriot fans think I hate them because I will sometimes observe things that (teams are) not doing well, like spending over $200 million on free agents after Tom Brady went to the Super Bowl. And now they had to (get rid of) two starting guards because they couldn’t afford them.”

What’s the most right you’ve been?

“I was bigger on Lamar entering 2019 than literally anyone. Lots of people didn’t think he would have success after how 2018 went. I went on a media tour before the season predicting a massive season. He won unanimous MVP in 2019.”

The Ravens should be letting Lamar Jackson pass more on first down, when the defense is expecting run.

What’s the most wrong you’ve been?

“I believed that once the Seahawks paid Russell Wilson they would transition to a more pass-first offense. I underestimated how much Pete Carroll would cling to his old-school roots, even though the run-first style he preferred was extremely inefficient. Seattle never came close to making it back to the Super Bowl despite Russ and a talented roster, and I put a lot of that blame on Pete’s aversion to passing the ball.”

Do you have a Super Bowl prediction?

“I think the Chargers have the most talent. The only thing that will prevent this team from going to the AFC Championship game is injuries or coaching.

The NFC is more wide open. I think if Trey Lance is the guy that he could be, the 49ers are a good longshot. This is a good year to take some of the longshots in the NFC. I would take flyers on Niners or the Vikings.

The winner: the Chargers because I think they’re the best team top to bottom.”