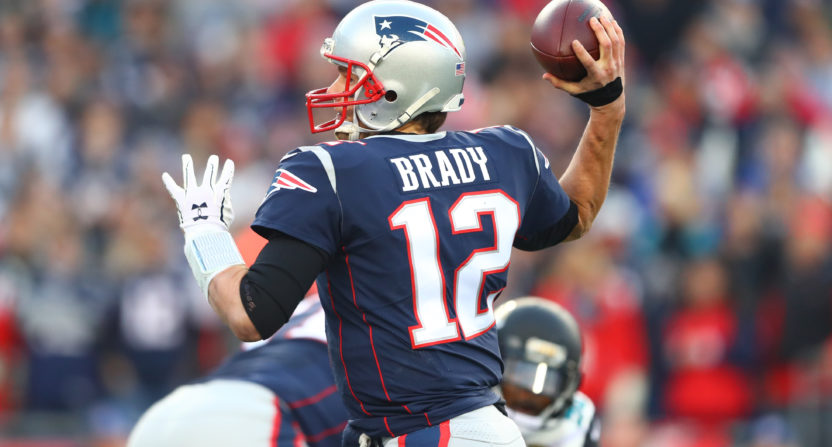 On Thursday night, the Boston Herald published a piece in which longtime columnist Ron Borges reported that New England Patriots quarterback Tom Brady planned to skip OTAs unless he was given a contract commensurate with that of former backup Jimmy Garoppolo. Via a cached version of the article:

According to sources close to the league’s Most Valuable Player, Brady is ready to sit out all of this year’s offseason organized team activities unless he receives a contract extension that carries with it up-front money similar to what his former protege, Jimmy Garoppolo, will receive from the San Francisco 49ers. Garoppolo yesterday signed a five-year, $137.4 million deal with $74 million guaranteed.

By Friday morning, the Herald had entirely scraped the piece from its website after the hosts of WEEI’s Kirk & Callahan claimed that the supposed scoop was actually a hoax. Per Kirk & Callahan, Borges’ source on the story was a fan known to local radio listeners as “Nick in Boston,” who was impersonating Brady’s agent Don Yee.

UPDATE: The Herald confirmed Friday afternoon that Borges’ report was based on false information and announced that his column had been suspended.

Boston Herald: "A column by Ron Borges in today’s Herald regarding Patriot Tom Brady’s salary discussions was based on information which proved to be false. The Herald apologizes to Brady, his agent Don Yee and the Patriots, and to our readers for this erroneous report…"

Here are the texts Nick apparently sent to Borges, pretending to be Yee.

Nick in Boston told Ron Borges that he was Don Yee and @RonBorges ran with it. Here is the evidence. pic.twitter.com/xKc4e5XGOy

Shortly after Borges’ column was published, NBC Sports Boston’s Tom Curran tweeted that, per his sources, the report was “off the reservation.”

After Kirk & Callahan spent the morning gloating on air and on Twitter about Borges’ alleged false reporting, the Herald removed the column from its website.

We took down the Herald this morning. pic.twitter.com/S5cIxVJDn7

Though reporters are taught to confirm information with multiple sources, they ultimately have some discretion about what is firm enough to print. An out-of-the-blue scoop from a phone number whose user claims to be an agent, however, certainly would not seem to reach that threshold. In other words, if Kirk & Callahan’s version of events proves true, Borges really messed up.

This incident will remind Patriots fans of the Herald’s infamous 2008 report that the Patriots had taped the St. Louis Rams’ pre-Super Bowl walkthrough before Super Bowl XXXVI, for which the paper eventually apologized.

Borges himself has somewhat of a history of shaky journalistic practices, having left the Boston Globe after a plagiarism scandal.