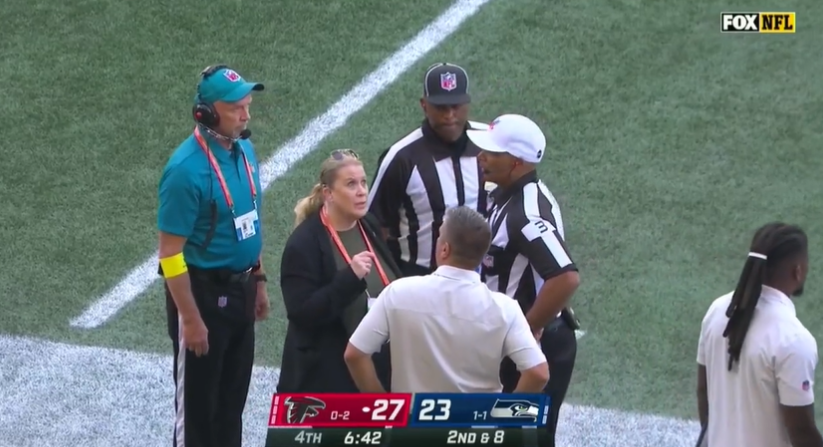 Saturday’s Pac-12 game between Stanford and Washington had a delay for an odd reason. An unauthorized drone was flying over Washington’s Husky Stadium. Not even 24 hours later and it happened again in the same city, this time in Sunday’s NFL game between the Atlanta Falcons and Seattle Seahawks.

In the fourth quarter of the game, the officials pulled the players off of the field at a seemingly random time. No overserved fan ran on the field and there was no dangerous weather in the area. Shortly after the Seahawks and Falcons went to the sidelines, the reason for the delay was revealed. And, in the famous words of Yogi Berra, it was “déjà vu all over again.” There was an unauthorized drone flying over Seattle’s Lumen Field.

Tori McElhaney, who covers the Falcons for Fox 5 in Atlanta, was one of several people to report the news.

I'm told there's an unidentified drone over the stadium. Same thing happened at Washington vs. Stanford last night, too.

Get your drones under control, Seattle. https://t.co/rPLymVlNh0

While drone delays aren’t unprecedented in sports, they are rare. So, there can’t be much precedent for how the officials are supposed to deal with them. And when we consider that the person operating the drone isn’t necessarily going to be that close to the stadium (or at least the actual field), these delays feel like the kind that could take a while. Fortunately, that has not been the case in either of these two scenarios.

Sunday’s delay was less than 10 minutes while Saturday’s was only slightly longer. Ultimately, that’s not much different than someone running onto the field, or even an injury time out.

Still, while Seattle is a city known for being at the forefront of trends, we can only hope that doesn’t happen here.