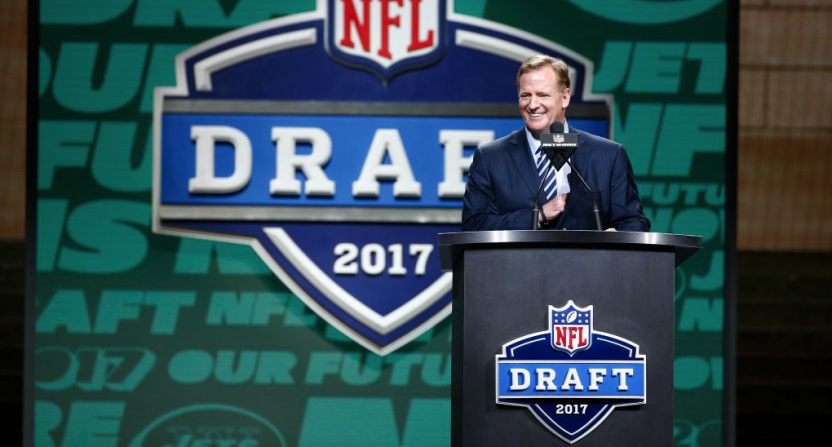 ESPN has had a pretty rough week by just about any measure, and though positive ratings news probably isn’t much solace for those who lost their jobs, the Worldwide Leader’s NFL Draft broadcast did pick up some year-over-year gains.

The Draft has always been a fascinating study in event television; it benefits greatly from not having any other real sporting competition, beyond opening round NBA playoff games and April baseball. Plus it’s the main NFL attraction between the Super Bowl and the regular season; it also sits on a crossroads of college and professional football fandom, the two sports most likely to have fans willing to sit for three hours and watch what amounts to a corporate conference call combined with a high school year-end awards ceremony.

But, hey, ratings are ratings, and ESPN management will likely take all the positives they can get at this point. Via their own release:

ESPN’s Round 1 telecast of the 2017 NFL Draft last night (7:59-11:49 p.m. ET) delivered a 4.8 overnight rating according to Nielsen, based on the metered markets. The overnight rating is up two percent from the opening round in 2016. The draft rating peaked from 9:30-9:45 p.m. with a 5.6 metered market rating. Based on overnight ratings, ESPN is expected to win the night in primetime across broadcast and cable.

Streaming numbers are also on the rise, and at some point they’re just going to have to be factored in with the regular numbers, although the argument could be made that it’s a wholly different demographic, in terms of sensibilities:

ESPN live streaming of Round 1 attracted an additional average minute audience of 243,000 viewers, a 23 percent increase from last year (198,000 viewers). The telecast averaged 1,292,000 total unique viewers, a 66 percent gain year-over-year, and 54,259,000 total minutes, a 22 percent increase. Based on all three metrics this is the most-streamed telecast of the NFL Draft on record for ESPN across all rounds. Non-streaming digital usage (includes NFL content on ESPN.com, the ESPN.com homepage and the ESPN app) averaged 1,071,000 viewers in the average minute during the live window, a 89 percent surge from 2016.

The 2.8% bump might not be that much overall, but combined with the streaming increase (and the fact that in the wake of layoffs, a ratings loss compared to 2016 would have been approaching United levels of bad PR), it’s just what ESPN needed.

They’re back at it tonight for the second and third rounds at 7 PM Eastern, if you really need something to do.