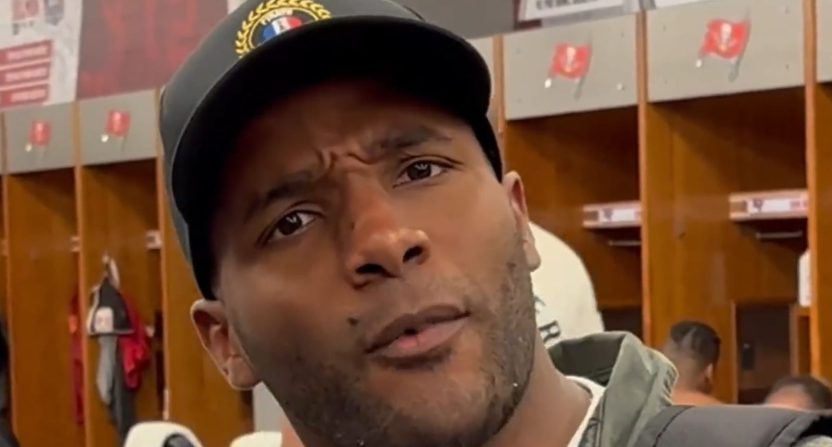 After days of receiving criticism for her role in the awkward media exchange with Tampa Bay Buccaneers running back Giovani Bernard, ESPN reporter Jenna Laine has issued a detailed apology.

Sunday afternoon, Bernard botched a pivotal fake punt during the Bucs’ 34-23 loss to the Cincinnati Bengals. Following the game, as reporters approached Bernard to ask about the play, the backup running back was reluctant to answer questions.

“Oh, now you guys want to talk to me?” Bernard reportedly asked as reporters came up to him.

“What have you done for us to talk to you about all year?” Bucs reporter Greg Auman fired back.

“You were hurt all year!” ESPN’s Jenna Laine yelled in the viral video.

Bernard appeared baffled by the reporters’ defense, responding with a befuddled look before he eventually agreed to take questions and accepted blame for the botched punt. But after Laine shared the cringeworthy video on social media, the reporters involved were criticized for acting so brashly as they pushed back on Bernard.

Tuesday afternoon, Auman admitted he owed Bernard an apology. And after initially doubling, tripling, and quadrupling down on her role in the incident, Laine issued a detailed apology Wednesday night. Laine began her statement by noting she waited until after she apologized to Bernard in person before sharing her explanation on social media.

“He’s a better person than me. For many reasons,” Laine wrote. “The first misstep was posting a video of our interaction with Giovani.”

Laine added that she didn’t intend for the video to be a ‘gotcha’ moment for Bernard as he stood in the locker room with microphones and cameras shoved in his face. The ESPN reporter recognizes now that she caught Bernard in a “vulnerable moment” and there was no benefit in sharing that to the masses on Twitter.

“The second misstep,” Laine continued. “My very defensive comments after. My intent was that these athletes didn’t get to where they are with hand-holding, they’re some of the toughest people on the planet and accountability is part of their daily lives. I realize that it came off as cruel and insensitive.”

Neither party looked great in the exchange Sunday afternoon. Bernard for questioning why the media was approaching him after his botched punt, and reporters for fanning the flames by yelling and insulting a vulnerable athlete. But Laine’s statement is at least a solid display of media accountability, albeit one that comes after she attempted to double down on her role in the incident.