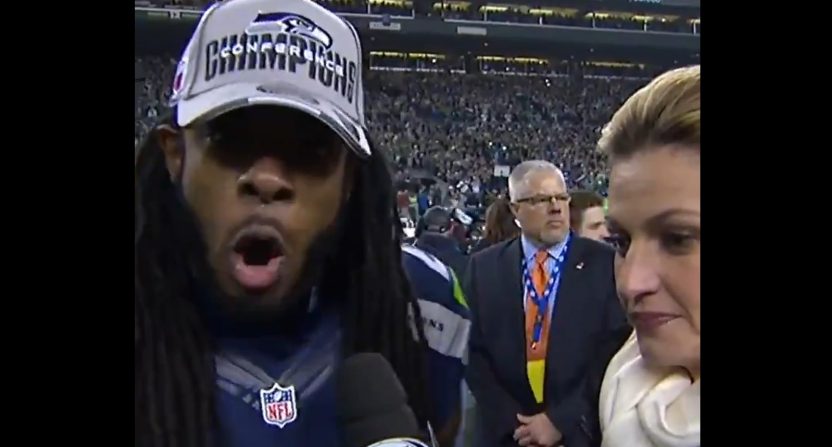 Erin Andrews knew her 2014 interview with Richard Sherman was going to be a memorable career moment, but she wishes it wasn’t a regrettable one.

The renowned sideline reporter has repeatedly shared the regret she has over her famous postgame conversation with Sherman following the 2013 NFC Championship Game. Recently, she spoke to the former cornerback about the interview on her podcast Calm Down with Erin Andrews and Charissa Thompson.

On the final play of the game, Sherman sealed the Seattle Seahawks win over the San Francisco 49ers by swatting away Colin Kaepernick’s pass intended for wide receiver Michael Crabtree. Minutes later, Sherman was on national TV oozing with emotion as he declared himself the best cornerback in the NFL and bashed Crabtree for talking about him earlier in the week.

"WHEN YOU TRY ME WITH A SORRY RECEIVER LIKE CRABTREE, THAT'S THE RESULT YOU GONNA GET!"

Six years ago today, Richard Sherman let Michael Crabtree know he was not the one to be tested ?‍♂️

During Sherman’s appearance on their podcast, Thompson praised the interview as a “great raw moment,” and asked Andrews why she’s so critical of it.

“I knew what happened after and why I got vocal after is because I didn’t want anyone to think he was scaring me,” Andrews said, responding to the notion that she appeared frightened by Sherman’s intensity. “He wasn’t f*cking scaring me.”

. @ErinAndrews still hates the questions she asked during the postgame interview with @RSherman_25 after the 2013 NFC Championship Game ? pic.twitter.com/g1TOhEZvrY

— Calm Down with Erin and Charissa (@calmdownpodcast) December 16, 2022

“My face, and I’ve said it the whole time, wasn’t like ‘Oh my God, oh my God, he’s scaring me, I’m freaked out, this athlete is yelling at me,'” Andrews continued. “No, it was, This is f*cking awesome, this has never happened, people are going to lose their minds that this is happening.”

And they did. Which is why nearly a decade later, this postgame interview between Andrews and Sherman remains one of the most memorable moments from both their careers. For Sherman, it was somewhat of a coming out party, proving himself as a shutdown corner. For Andrews, it’s an interview she still wishes she can redo.

For her second and final question of the interview, Andrews awkwardly asked Sherman, “Who was talking about you?” Sherman already mentioned Crabtree’s name during the brief postgame interview. But because he yelled “Don’t you ever talk about me!” Andrews wanted to ensure the audience knew he was talking about his opponent on the field and not telling her to be quiet.

“I don’t want people to think he’s screaming at me,” Andrews explained. “‘Don’t you ever talk about me again.’ I know he’s not saying that, but what I should have f*cking done was not turn into the excited sports fan that I was.”

Andrews might wish she could redo her questions from that 2014 conversation with Sherman, but credit her for allowing the moment to shine by staying out of the way. Because the end result was one of the most memorable sideline interviews in NFL history.

[Calm Down with Erin and Charissa]