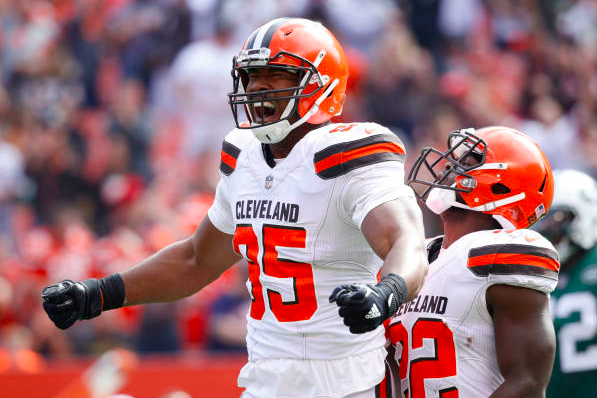 Dysfunction is everywhere in Cleveland as the Browns have somehow, improbably, sunk to new lows as a franchise. The team is winless halfway through the 2017 campaign and things are going from bad to worse in the front office. There have been reports of a rift between the executives and the coaching staff, DeShone Kizer has been treated like a yo-yo by Hue Jackson, and there was the whole botched A.J. McCarron trade. Additionally, in spite of having more draft picks than anybody knows what to do with, the Browns have incredible dearth of talent on their roster.

That dysfunction is even making its way into feuds between players and analysts working for the team. This dispute involves comments made by former Ohio State and San Diego Chargers linebacker Matt Wilhelm. He currently works for the Browns website and the local ESPN affiliate as co-host of Browns Daily.

Via Cleveland.com, last month Wilhelm questioned the toughness of first overall draft pick Myles Garrett. The defensive end self-reported a concussion, which is an incredibly sensible thing to do when one experiences concussion like symptoms, especially with everything we know now about CTE.

Wilhelm criticized Garrett for it, saying that he would never self-report something that was a “dinky little injury.”

“I find myself questioning it,” Wilhelm said on the Oct. 25 show, which airs afternoons on ESPN 850 WKNR. “I’m an old school guy and I know there are former professional athletes that played in an era of football that I could’ve never imagined playing in with the head trauma and the issues that we see individuals dealing with.”

Wilhelm continued that if he came in on the off day “and if I have a little headache or if I’m a little queasy or I’ve got a little sensitivity to light, I don’t find myself saying anything to anybody other than someone close to me who might not be a Browns employee or a Browns teammate. Maybe my brother, or a friend of mine in the city, maybe my mom and dad who understand who I am and that I’m like kind of tough and I don’t just kind of like back out with small dinky little injuries.”

Yikes. While that comment might raise a lot of eyebrows, it does show the old school football mentality that I’m sure still exists in large portions of the football universe. Even though Wilhelm played in the early 2000s, what we know about concussions and CTE has greatly changed the perspective of someone who is a rookie in the NFL like Garrett. It’s a vastly different world now as far as the education surrounding head injuries is concerned.

Garrett took the high road in his response, which must be commended given how it seems the entire ship is going down in Cleveland.

“He has his own opinion and he can go about life the way he wants to, but I want to take care of my brain,” Garrett said. “I’ll put my body on the line, but I’m not willing to put my brain on the line for this game. I love it, and I’ll do anything for it, but I want to have a productive future and a healthy family and be able to love and care for them the way I should.”

Where does the franchise fall in this? They stood by their #1 pick, defending the importance of players self-reporting any kind of head trauma and calling Wilhelm’s comments “ill-advised and inappropriate” in a statement released to Cleveland.com.

“Our athletic training staff and medical team have worked extremely hard to establish a culture where our players understand the importance of self-reporting,” team spokesman Peter John-Baptiste said. “Our coaching staff, athletic trainers and doctors strongly encourage our players to disclose any irregularities concerning their bodies, particularly those related to the head and neck area.

“Matt Wilhelm’s on-air comments directly contradict the club’s stance on the subject and our message to our players. We addressed the matter with Matt immediately after it occurred and he understands his comments were ill-advised and inappropriate.”

Garrett has shown flashes of brilliance in his time on the field so far and the last thing Cleveland needs is its own analysts questioning his toughness. We’ve seen the pendulum shift in the media and in the larger NFL world nationwide towards a better awareness regarding concussions, but this still shows there’s a lot of work to be done.

There is no doubt from a neutral vantage point here that Garrett did the right thing in self-reporting his possible concussion. And who could blame him for wanting to have a healthy life after football? Yes, the old-school mentality is very, very strong in some former players, but one would think that protecting the long-term health of the team’s #1 overall draft pick is also in the best interest of the Cleveland Browns franchise.