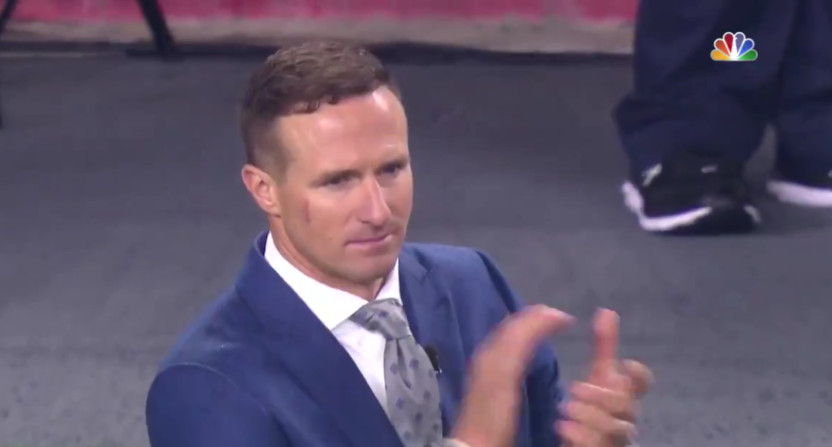 As mentioned in our previous discussion of NBC’s Football Night In America pre-game show being “on location” for this week’s Tampa Bay Buccaneers-New England Patriots Sunday Night Football game, there isn’t always a big advantage from bringing a pre-game show on site. However, that sometimes can lead to interesting moments. And one of those came when Tom Brady broke the NFL career passing yards record in the first quarter:

That led to this shot of Drew Brees, the previous record holder who now owrks for NBC (including on Football Night in America), applauding from the sidelines:

.@drewbrees applauds Tom Brady for breaking his record for the most passing yards in NFL history.

Part of what’s interesting here is that Brees and Brady went back and forth on that record a few times last season. So this is a more permanent change. And it’s certainly fascinating to have the last record holder there on the sideline when this happened.

The other thing that was interesting about this is that the record-breaking play didn’t see a stoppage until Brady himself called timeout. And tweets along those lines saw some criticism of the Patriots in their replies for not stopping the game.

They just announced the Tom Brady passing record at Gillette. No stoppage other than Brady calling a timeout at the line of scrimmage. Quick graphic on the video boards and a cheer from the crowd.

But what’s well worth noting there is that the lack of a planned stadium stoppage was per Brady’s own request, as Jay Glazer of Fox Sports noted Sunday morning (as relayed by Mike Florio of Pro Football Talk):

[I]t seemed plausible that Brady had requested that no big deal be made.

As explained by Jay Glazer of Fox Sports, that’s exactly what happened.

Brady doesn’t want to stop the game. And it makes sense. He’ll have a hard enough time managing his emotions without the game coming to a halt to commemorate the setting of a record that, given his desire to play at least through 2022, may not be broken for a very long time.

So none of this was a slight at Brady from the Patriots. And, as The Ringer’s Rodger Sherman noted, it’s not like previous moments breaking this record have had incredible levels of solemnity and dignity:

Remember when Drew Brees broke the all-time passing yardage record and they had a ref gave him a laminated sheet of paper. pic.twitter.com/mcErwQTL2j

At any rate, it was certainly interesting to have Brady break this record at the Patriots’ stadium, and to have him do so with Brees on the sidelines there.