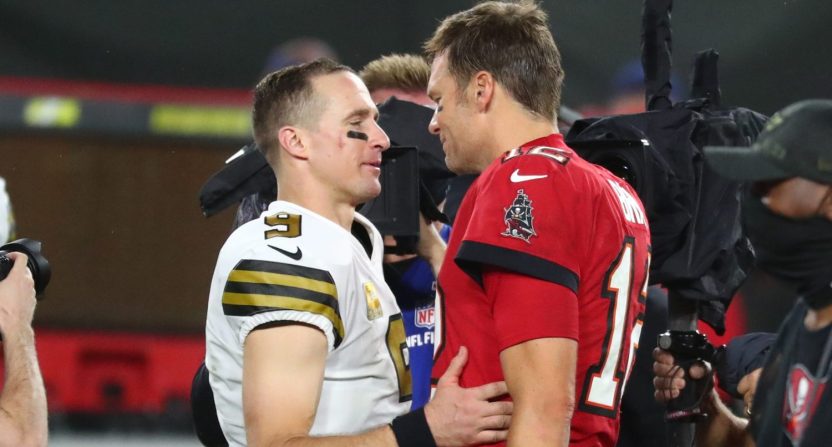 After one unsatisfying season as an NFL broadcaster with NBC, Drew Brees has a warning for Tom Brady and his mega-contract that looms with Fox.

Brees joined The Dan Patrick Show Thursday morning and the former Super Bowl MVP was asked if coaching could be in his future should Sean Payton offer him a job as an assistant. The retired quarterback, however, cited leaving broadcasting after just one season to spend more time with his family. With that in mind, Brees didn’t sound like he would be too enthusiastic about joining Payton’s staff when and if the former NFL head coach returns to the sidelines.

“Last year, I went the media route,” Brees said of his post-retirement career. “That was really enjoyable. I felt like I learned a lot…the reason I didn’t do that this year was simply because it was taking away all my weekends.”

Brees’ emphasis on the grueling schedule that is being an NFL broadcaster prompted Patrick to reference Brady’s plan to go straight from the field to the booth whenever he finally decides to retire from playing.

“If you’re gonna do it right, you’re gonna spend the same amount of preparation in preparing to broadcast the game, to do a three-hour production, as you would to play the game,” Brees said of the commitment it takes to be a successful game analyst.

Brees did, however, note that as an analyst, you at least get the opportunity to do a lot of that preparation in your own house and on your own time, rather than being at the mercy of a team or coach. But the schedule is grueling, nonetheless.

“I’m not sure exactly what Tom is signed up to do, I know what’s been announced,” Brees said of Brady’s reported $375 million contract with Fox to be their lead NFL analyst and a network ambassador. “But it is definitely a commitment, and it takes more time than you think. I definitely have a respect for the guys that are in those positions and the guys that really do it the right way, you know the preparation that goes into that.”

After retiring, Brees rushed to the broadcast booth with sights on being the next Tony Romo. Unfortunately, he failed to impress as a broadcaster during his one season as a studio and game analyst for NBC, which led to a mutual parting of ways.

Brady appears ready to follow in the footsteps of Brees and Romo by rushing off the field and into the broadcast booth, whereas Peyton Manning recently discussed his desire to avoid the commitment of having to work every weekend during the NFL season. Despite offers to be a lead analyst, Manning eased into retirement and sought opportunities that were a better fit for his schedule. It sounds like Brees will take a similar approach moving forward. But thanks to his disappointing NBC stint, Brees will now move through retirement without the mystique of owning untapped broadcasting stardom that Manning still carries.