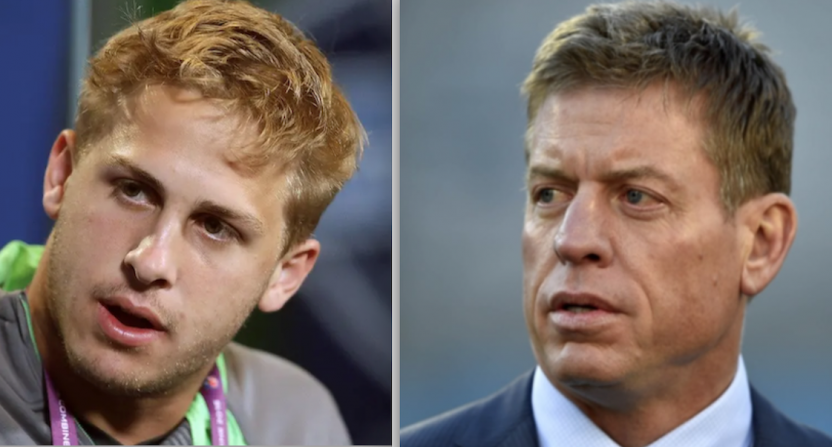 Quarterback Jared Goff is on his way to the Detroit Lions after the Los Angeles Rams traded him and three draft picks (including two future first-round selections) in exchange for Matthew Stafford.

Though Goff is going to a losing team, he apparently knew that he’d fallen out of favor with Rams coach Sean McVay and was ready to move on. And if he wasn’t certain, Troy Aikman’s commentary whenever he called a Rams game this past season probably gave him an idea. A piece by NFL.com’s Michael Silver indicates that the Fox analyst was influenced by what he heard from McVay during production meetings.

“Routinely trashed this season on FOX telecasts, specifically those with Troy Aikman as the lead analyst, Goff could reasonably assume that McVay’s words about his quarterback’s play in network production meetings were far from glowing.”

Larry Brown Sports highlighted several examples of Aikman criticizing Goff on-air during the Rams’ Week 16 game at Seattle that came off as rather harsh.

“It just doesn’t get any uglier than that.”

Aikman feels almost uncomfortable giving credit to Jared Goff for literally not missing a snap after popping his thumb back into place. Can’t understand his disdain for him. So bizarre.

To be fair, TV analysts use what they learn in production meetings with coaches and players to inform their commentary. That’s the purpose of those meetings. It’s not a criticism of Aikman. And according to Silver’s report, Goff likely wasn’t aware of what Aikman was saying. But it’s also reasonable to assume that Aikman could have been going off what he heard from McVay.

SI.com’s Jimmy Traina reached out to Aikman for a response. As you might expect, the Hall of Fame quarterback did not take kindly to what Silver was implying.

“‘Unlike Michael Silver, I strive to be fair and balanced and do not have an agenda when doing my job,’ said Aikman. ‘The record will show that I have been a strong supporter of Jared Goff’s over the years. Unfortunately for the Los Angeles Rams and Jared Goff, he did not perform at his best in the games that I broadcasted this season and I’m confident Jared would be the first to agree.'”

The 2020 season indeed wasn’t one of Goff’s best. His 20 touchdown passes were the lowest total among his four seasons as a starter, as was his average of 7.2 yards per attempt. His 13 interceptions was the second-highest total during that span and he ranked 23rd in Quarterback Rating among his peers. But despite dealing with a thumb injury, Goff still threw for nearly 4,000 yards.

Yet Goff probably didn’t need to hear Aikman’s analysis to know what his coach thought about him. After all, he got direct feedback from McVay and the coach’s feelings were probably apparent.

“I’m just excited to be somewhere that I know wants me and appreciates me,” Goff told Silver. “I’m moving forward and couldn’t be more excited to build a winner [in Detroit]. I’m excited about Dan [Campbell] and the whole staff.”

On the bright side, Aikman probably won’t do many Lions games in upcoming seasons. Maybe Detroit’s annual Thanksgiving game, if that ends up on Fox. We’ll have to listen for any change in Aikman’s analysis of Goff and whether or not Lions head coach Dan Campbell or offensive coordinator Anthony Lynn have more positive assessments of the quarterback.