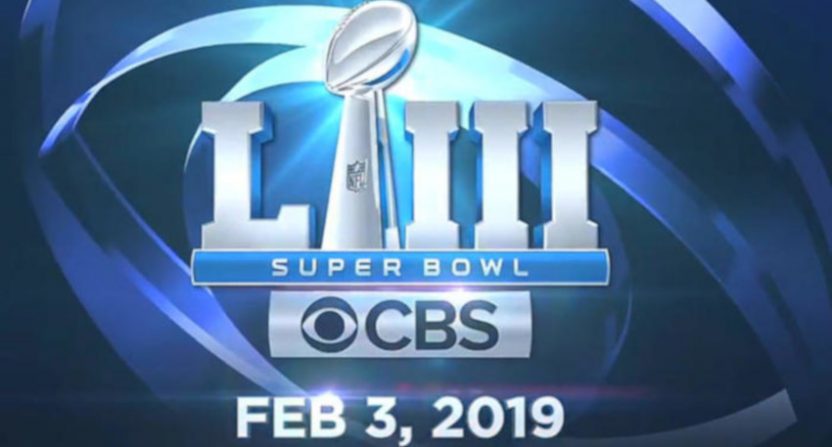 One of the few reliable elements in the sports media world recently has been rising Super Bowl ad prices. The game’s status and viewership and the consistent interest in its ads, plus the always-growing numbers of companies looking to make a big splash, has helped ads sell for more and more each year. And yet, it seems that may not happen this year. As per Bloomberg’s Gerry Smith, CBS’ prices so far are about in line with what NBC charged last year, which would mark the first time they’ve stayed flat since 2010:

The meteoric rise of Super Bowl ad prices looks to be over.

CBS Corp., which will broadcast the big game from Atlanta on Feb. 3, is selling 30-second commercials for $5.1 million to $5.3 million, people familiar with the matter said. That’s roughly the same price as last year, when Comcast Corp.’s NBC sold them for $5.24 million, according to research firm Kantar Media.

…Super Bowl ad prices had steadily increased over the past decade, in some years making huge leaps. Between 2012 and 2013, the price went up $500,000, according to Kantar Media. It jumped $400,000 between 2015 and 2016. Now Super Bowl ad prices “seem to be peaking,” Bloomberg Intelligence analyst Geetha Ranganathan said in a note Thursday.

Here’s a look at the Kantar Media graph Smith includes: 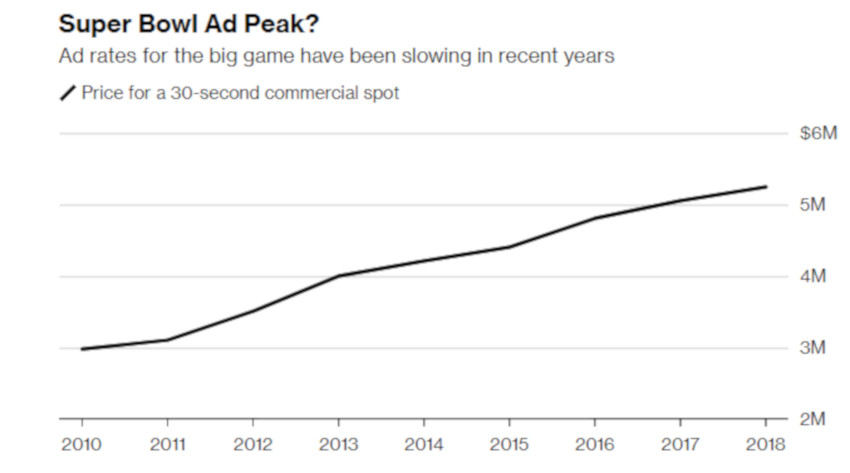 What’s particularly interesting about this is that there hasn’t been a massive correlation to viewership. The Super Bowl audience peaked in 2015 (114.4 million for Patriots-Seahawks), but fell to 111.8 and 111.3 million respectively for the 2016 and 2017 games, and to 103.3 million last year, and yet, ad rates rose all the way until this year. And last year’s rising ad rates came despite a remarkable decline in regular-season ratings (which dropped 9.7 percent), which might have suggested that the Super Bowl ratings would be down. And this year’s steady numbers come despite a five percent ratings rebound.

Also, last year saw NBC selling both the Super Bowl and the Winter Olympics, and brands that didn’t want to pay Super Bowl prices could easily jump on the Olympic bandwagon. Moreover, it seemed that even with declining Super Bowl ratings there would still be massive demand, as the rest of TV is struggling much worse than the NFL is. But Smith’s report does appear to suggest that there may indeed be a limit to what people are willing to pay for a Super Bowl ad.

Of course, none of this is necessarily a “The sky is falling” moment for CBS, or for NFL broadcasters in general. Smith notes that CBS has already sold over 90 percent of its Super Bowl inventory, so there are still plenty of takers, and this $5.2 millionish rate is still way better than anything else on television. And that’s still very good for the network, and for the NFL; there’s still strong demand for these Super Bowl slots. (It’s also worth noting that CBS perhaps could have jacked the prices up more if not for their internal standards requiring them to reject certain ads, such as those endorsing medical marijuana.) But even with rebounding regular season ratings, CBS wasn’t able to keep up the trend of rising Super Bowl ad prices, and that suggests that they’re not going to just go up and up forever.

Of course, if this year’s Super Bowl pulls in massive ratings, maybe the price will rise again next year. But it also seems quite possible that this may just be the peak. And while a peak of around $5.2 million per 30-second slot is certainly not bad for networks or for the NFL, it’s not as good as perpetually-rising ad rates.