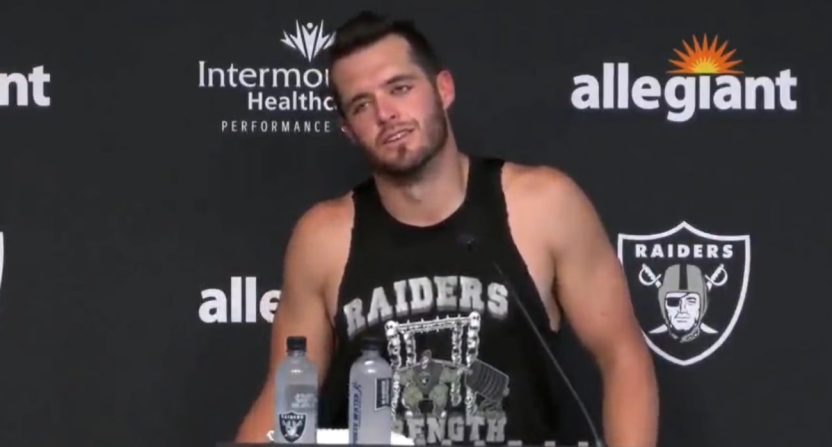 Derek Carr seems intent on developing an ‘us against them’ mentality this year in the Las Vegas Raiders locker room, and apparently, ‘them’ includes the media.

Despite a playoff appearance last season, followed by a big offseason featuring the acquisition of wide receiver Davante Adams, the Raiders are still being predicted by many to finish last in the AFC West. It’s less of a knock on the Raiders and more of a testament to a division that contains Patrick Mahomes, Russell Wilson and Justin Herbert.

But during a recent press conference to kick off training camp, Carr addressed his claim that “no one thinks anything of us.” And it prompted a testy exchange with ESPN’s Paul Gutierrez, a longtime NFL reporter.

“That crap don’t matter, you know. We have to go play the football games, and that’s honestly how I feel,” Carr said of the low expectations surrounding the Raiders. “I just got to be more honest. I just got to start speaking my mind. And as I’m getting older, I just say what I want to say. And so my real answer is the expectation all that kind of stuff who says that honestly, it doesn’t matter, it really doesn’t whether they don’t say anything or they say a lot. Nobody cares. But hopefully, they talk about us at the end. But right now, that crap don’t matter.”

Carr’s monologue prompted what seemed like an obvious question from Gutierrez. “If it doesn’t matter, Derek, why do you talk about it?” Gutierrez asked.

“Thank you, Paul, it’s so good to see you,” Carr replied with sarcasm and an eye roll. “I say it because I’m a positive person, and I try and encourage my teammates. There’s a way that I say things to encourage my locker room to maybe put a chip on their shoulder, and sometimes I do it too much. And so I don’t appreciate your tone either, you can pump that back a little bit.”

Maybe this is a new beginning for Carr. He’s spent the duration of his career on the cusp of being a franchise quarterback, often getting criticized for being too nice, too polite, maybe even too sensitive. Perhaps Carr’s exchange with Gutierrez signals the 31-year-old quarterback is done being the nice guy.

Carr feels his team is being disrespected by the media and he’s going to use that as fuel to unite the locker room. But Gutierrez may have been the wrong target. Shortly before Carr displayed an annoyed tone with the ESPN reporter, Gutierrez became one of the few media members who picked the Raiders to carve their way through the AFC West and return to the playoffs. Considering it would be the first time the Raiders make consecutive trips to the playoffs in two decades, that’s a bold prediction. Maybe Gutierrez should “pump that back a little bit.”