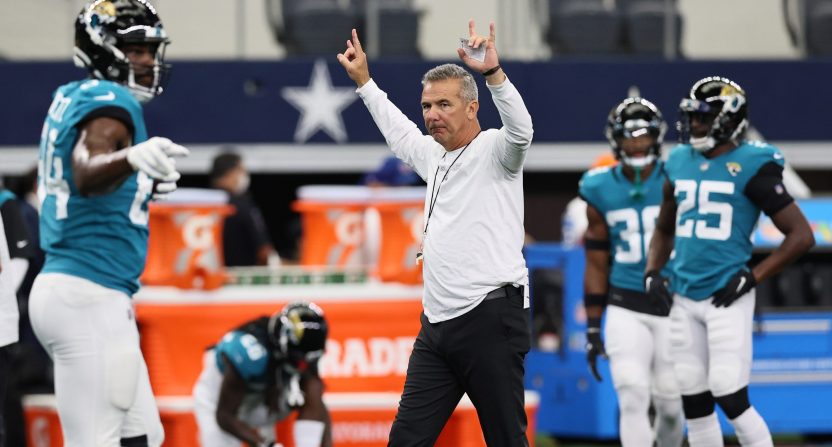 If there is any NFL coach that reporters would want to speak to right now, it’s Urban Meyer. Between reports of “unhinged” behavior behind the scenes, Jacksonville’s disappointing performance against the Texans this weekend, and the presumption that he might have interest in the USC vacancy, media members are lining up for the chance to interview the first-year head coach.

Media members who cover the Denver Broncos are certainly interested as the Jaguars are this weekend’s opponent. However, Denver Post beat writer Ryan O’Halloran tweeted out Tuesday that Jacksonville has declined to make Meyer available to them this week via the usual conference call process.

( Wonder if that's when he'll be visiting with USC!! #kiddingbutonlyalittle )

The NFL recently changed the rules to make it optional for teams to make their coaches available to media for game-week calls. According to PFT, the change went into effect this season, reportedly because “they weren’t useful or properly utilized.” That seems like a strange reason given how much play the soundbites created during them get during the week.

O’Halloran noted in a Twitter exchange that while he was aware of the change, he considers it “rare” for such a request to be declined.

new rule is it's option, but if request is made, rare to turn it down i think

Scott Monserud, the Sports Editor at The Denver Post, called it a “bush move” for Meyer to avoid the call.

Bush move by Urban Meyer and Jags not to have their coach on conference call with Denver media; but it's up to NFL to require such interaction so equally bush on its part

More Denver journalists jumped on the bandwagon as well.

Said it before, I’ll say it again: Urban Meyer will be this generation’s Bobby Petrino and Lou Holtz: great college coaches who didn’t understand the pro environment and bombed in the NFL. https://t.co/GzgvXhmbTa

Mike Klis, who covers the Broncos for 9News, and never one to mince words, also chimed in.

This is a disgrace. Toughen up, Urban. This is the NFL. #9sports https://t.co/A8ENSXwV5q

Into the fracas stepped Amy Palcic, whom you might remember from when the Texans fired her while various NFL reporters rushed to her defense. Palcic was hired by the Jaguars earlier this year to lead their PR and communications efforts and she claimed responsibility for Meyer’s lack of availability.

It was 100% my call, @mikeklis @ryanohalloran. Rip me. Majority of teams don’t do these anymore. I understand we are living in a world where people have to be outraged about something.

Palcic may or may not be right about the “majority of teams” doing this,  but fans and media members are certainly accustomed to seeing NFL head coaches do conference calls and interviews during the week. And given the microscope that’s focusing on Meyer right now, anytime he breaks the perceived norm to avoid media contact is going to draw major attention.

Perhaps Meyer and the Jaguars got to avoid some direct questions they weren’t interested in answering, but whatever spotlight they were hoping to avoid is shining a bit brighter now. And the questions Urban might not have wanted to deal with today will certainly be asked by Sunday.