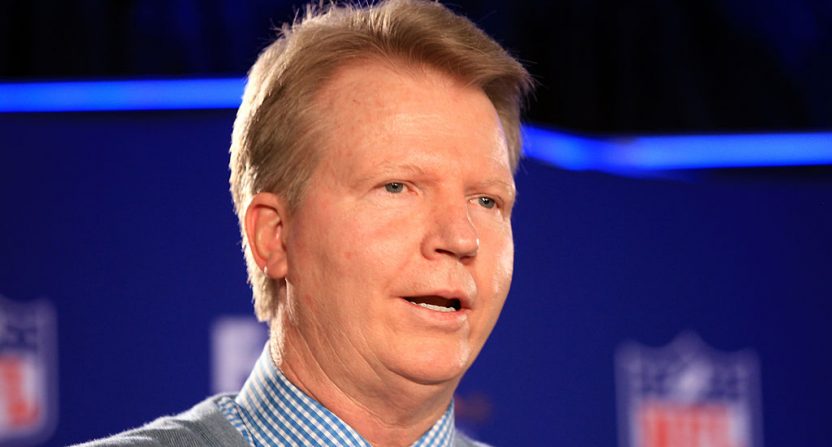 The news of Phil Simms’ demotion as the top NFL analyst for CBS has the sports media world buzzing. Being a top NFL analyst is similar to a Supreme Court justice appointment. Once you’re at the top spot, you’re there for life unless something egregious happens.

If you look back at the NFL on television, the demotion of a top analyst is a very rare occasion. In some instances, a top analyst will leave a network for the same position at another network. But over the years, networks have decided that a shiny new face is better than the old model. Let’s take a look at some of the demotions dating back to the 1970’s.

Classic TV Sports has been a tremendous resource in the researching of this article.

Kyle Rote was the top analyst for NBC for three seasons from 1968-1970. He was at the mic with Curt Gowdy for the historic Super Bowl III game along with Al DeRogatis and then solo with Gowdy on Super Bowl V. Before the 1971 season, NBC promoted DeRogatis to the top spot with Gowdy while Rote was sent to the “B” team with Jim Simpson. As Classic TV Sports notes, Rote remained with NBC for another three seasons.

DeRogatis remained as the top analyst with NBC until 1975. The Peacock signed a contract with Don Meredith luring him away from Monday Night Football. For selected games in the 1974, Meredith would join Gowdy and DeRogatis in the booth, but in 1976, Meredith worked with Gowdy, while DeRogatis left NBC altogether.

Meredith then left NBC to return to ABC’s Monday Night Football in time for the 1977 season. That left an opening at the top position so John Brodie was promoted to work with Gowdy. They remained a pair until NBC decided to replace both Gowdy and Brodie with Dick Enberg and Merlin Olsen in 1979. Brodie was demoted to the “B” team with Don Criqui and remained with NBC until 1984.

Enberg and Olsen would be firmly entrenched as NBC’s top NFL team through the late 1980’s. Then NBC Sports Executive Producer Terry O’Neil decided to shake up NBC’s teams by bringing in Bill Walsh as the “A” analyst despite not having any broadcast experience (sound familiar?). Olsen was demoted to a lower position and would leave NBC affer the 1990 season to join CBS. As for Walsh, he did not show the humor and personality that O’Neil saw in production meetings. Walsh eventually left NBC after the 1991 season.

Bob Trumpy replaced Walsh in 1992 and stayed with Enberg through 1994. They called consecutive Super Bowls, XXVII and XXVIII in 1993 and 1994. Then NBC lured Phil Simms away from ESPN and teamed him with Enberg and Paul Maguire as the top team until NBC lost the AFC package. Trumpy was demoted, but remained with NBC until the end of its NFL contract following Super Bowl XXXII in 1998.

Since NBC returned to the NFL with Sunday Night Football in 2005, it has used John Madden and Cris Collinsworth as its top analysts, but there have been no demotions.

The Tiffany Network has been more stable throughout the years. In 1974, Tom Brookshier became the network’s top analyst replacing Pat Summerall, but that was due to the fact that Summerall was moved to play-by-play. Together, Summerall and Brookshier became one of the funnier duos in the broadcast booth. But in 1979, CBS hired John Madden who had retired as Oakland Raiders coach. Right off the bat, CBS saw it had a rising star in Madden who was working on its “D” team with Gary Bender.

But it took a couple of seasons for Madden to replace Brookshier. In 1981, CBS pulled the trigger and promoted Madden to its top team first with Vin Scully and then eventually with Summerall. To reduce the blow for Brookshier, CBS made him a play-by-play man. He called one playoff game in 1982, an Atlanta-Minnesota matchup, but no more postseason assignments after that. Brookshier would remain with CBS until 1987.

Summerall and Madden would remain CBS’ top team until the network lost the NFC package in 1993.

The network got back into the NFL business in 1998 and then it signed Simms as its top analyst where he would remain until 2016 when it signed Tony Romo to replace him for the 2017 season and beyond.

ABC had the Monday Night Football package from 1970-2005. While it was best known for having two iconic broadcast trios in Frank Gifford, Howard Cosell and Don Meredith and Al Michaels, Gifford and Dan Dierdorf, ABC Sports did have some volatility with the package.

ABC is the only network to have fired a top analyst before the season and replace him with another. After the 1973 season, Meredith chose to leave for NBC where he had a deal that allowed him to call the NFL and also act in a dramatic series.

ABC replaced Meredith in 1974 with Fred “The Hammer” Williamson, but after evaluating his performance in the preseason, the network fired him and replaced him with Alex Karras. That is not just a demotion, but an outright bloodletting.

Frank Gifford would be moved twice on Monday Night Football. First he moved chairs from play-by-play to analyst in 1986 when Al Michaels become the lead announcer. In 1997, he was moved out of the broadcast booth in favor of Boomer Esiason. Gifford’s role was reduced to reading an introduction to one segment during “Monday Night Blitz,” the short-lived MNF pregame show that aired from the ESPN Zone in Baltimore and hosted by Chris Berman. Gifford left ABC after the season and would make rare appearances on television thereafter.

After replacing Gifford, ABC went into a period of turnover first with a three-man booth with Michaels, Dierdorf and Esiason in 1998, then Dierdorf himself was dropped by ABC which resulted in a Michaels and Esiason paring in 1999. Esiason was fired after Super Bowl XXXIV. This resulted in another three-man booth with Michaels, Dan Fouts and Dennis Miller for two seasons. But when Madden became a free agent in 2002, he joined MNF teaming with Michaels from 2002 though 2005 which would mark the final era of the primetime package on ABC.

The Worldwide Leader first obtained rights to the NFL in 1987 with 8 Sunday night games in the second half of the season. Its first team was Mike Patrick, Roy Firestone and a guest analyst. This only lasted for one season and Joe Theismann was brought in for the 1988 season while Firestone was dropped.

ESPN added Paul Maguire to the team in 1998 and he, Patrick and Theismann remained until 2005 when ESPN took over Monday Night Football and went with an entirely new commentary tandem.

In 2006, Theismann was brought over from the Sunday night package while Mike Tirico became the play-by-play man and Tony Kornheiser came over from Pardon the Interruption. The chemistry was not good from the start and after one season, Theismann was dropped and Ron Jaworski was promoted from the studio to the booth.

But after two seasons, Kornheiser left and in came Jon Gruden to work with Tirico and Jaws. They worked together from 2009 to 2011 before ESPN decided to remove Jaworski from the booth and sent him back to the studio thus making MNF a two-man booth with Tirico and Gruden. ESPN’s carefully worded announcement at the time made sure not to call the move a demotion, but Jaworski’s presence at ESPN has been reduced over the years.

To replace Tirico who went to NBC before the 2016 season, ESPN tapped Sean McDonough, but Gruden has remained a constant in the MNF booth dating back to 2009.

Fox has not had to demote its top analysts with Madden from 1994 to 2001 who left for ABC, then Troy Aikman/Cris Collinsworth from 2002-2004 and then Aikman working alone with Joe Buck from 2005 to the present.

The networks have made moves to their broadcast booths in hopes of improving their presentations. Sometimes they work and sometimes they don’t. But overall, the top analysts become the face of NFL coverage and in the case of Madden, they can become popular with the public or as with Simms, they can be a lightning rod.