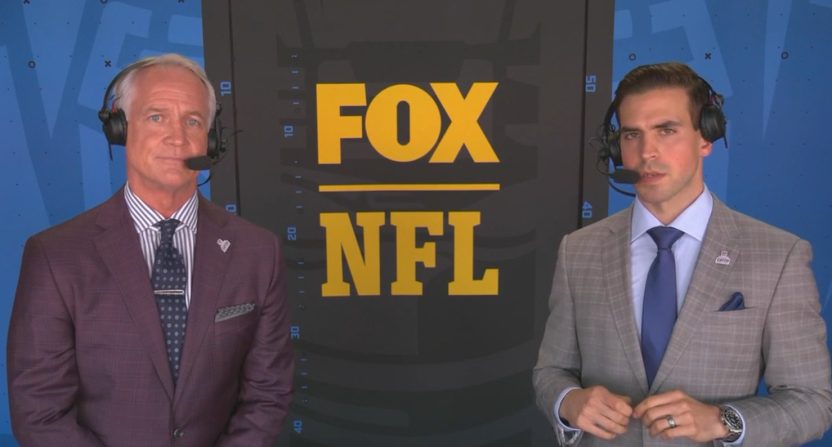 The Atlanta Falcons fell 21-15 to the Tampa Bay Buccaneers Sunday, but many are wondering if that game might have turned out differently. A large part of that is about a roughing the passer call against the Falcons inside the final three minutes. Atlanta was down by six at this point, but Grady Jarrett’s sack of Tom Brady seemed to set up a fourth-and-long situation, likely causing the Buccaneers to punt and the Falcons’ offense to get another shot.

The officials determined this was a roughing the passer call, though. That call gave the Bucs another first down, and paved the way for them to eventually kneel out the clock after another first down. And it took a whole lot of criticism from the NFL world. And that was notable even on the broadcast, where NFL on Fox announcers Joe Davis (seen at right above) and Daryl Johnston (seen at left above) were criticizing this right from the start:

The roughing the passer call after the Falcons' Grady Jarrett hit the Bucs' Tom Brady, and the roasting of it from Fox's Daryl Johnston. pic.twitter.com/3ba6PCdrHm

Johnston and Davis continued on with their criticisms of that call in three further segments over the next few minutes:

Part two of the comments from Johnston and play-by-play voice Joe Davis. pic.twitter.com/dWP0a452ZH

Part three of Daryl Johnston and Joe Davis on the Falcons-Bucs roughing the passer call. pic.twitter.com/lVvp7fmiAy

It’s interesting to see that level of criticism on a rightsholder under any circumstance. But it’s perhaps even more notable to see it continue for several minutes. That seemed like the right call from the broadcast in terms of serving viewers, considering how crucial that call was to the outcome and how it seemed to go against what had been previously called or not called even in this single game. But it will be worth keeping an eye on this to see if there’s any pushback from the NFL itself for this level of criticism of officials from announcers.

[The Comeback on Twitter; image from Fox Sports’ post-game video with Johnston and Davis]