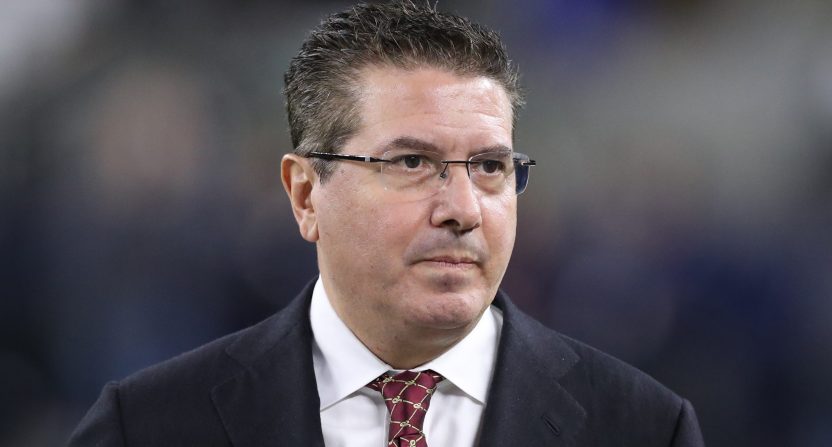 As several NFL owners are reportedly ready to see Daniel Snyder ousted from the league, the Washington Commanders owner is desperately clinging to his franchise by pointing a finger at ESPN.

Last week, ESPN published a scathing account of Snyder from reporters Don Van Natta Jr., Seth Wickersham and Tisha Thompson, claiming he was attempting to dig up dirt on his NFL colleagues while also reporting multiple owners have already turned against him. Snyder fired back Tuesday, sending a letter to each NFL owner denying the ESPN report and attempting to garner support from his NFL ownership fraternity.

“I would like to address a recent ESPN article that contains false and malicious statements about the Washington Commanders, our management team, and me and my family,” Snyder writes in the letter, signaling that he could attempt to launch potential litigation against ESPN.

“There is one allegation in the ESPN article that I feel it is important to address immediately,” Snyder continued. “The article cites unnamed sources who said: ‘They’ve been told that Snyder instructed his law firms to hire private investigators to look into other owners’ and Commissioner Goodell. That is patently false and intended to erode the trust and goodwill between owners that I take quite seriously. I have never instructed or authorized my lawyers to hire any private investigator on my behalf for any such purpose. And I never would.”

Snyder proceeded to offer an ‘owners must stick together’ type of rallying cry, encouraging his NFL brethren to push back against what he deems to be false reporting.

“While we are all fierce competitors on the field, we are a part of this organization because we love football, our teams and our fans,” Snyder wrote. “Having the privilege to own a franchise in America’s sport is something I know none of us take for granted. Falsehoods and lies being spread about any of our organizations hurts our League, our players and our fans, and we simply cannot let them go unchallenged.”

Declaring ESPN’s report “false” and “malicious” while imploring his partners not to “let them go unchallenged” very much sounds as if Snyder is gearing up for a lawsuit. But the Commanders owner also might feel backed into a corner as pressure mounts for him to sell the team causing him to place blame on ESPN as a mechanism of self-defense.

Snyder has been the subject of multiple investigations over claims that his franchise contained a toxic workplace culture with allegations of discrimination, bullying, sexual harassment and demeaning language. On Tuesday, Indianapolis Colts owner Jim Irsay jumpstarted what seems to be headed for a clash of titans by telling reporters he believes “there is merit” to remove Snyder from the league.

In order to force Snyder out of the league, 24 of the 32 NFL owners would have to vote for his removal.