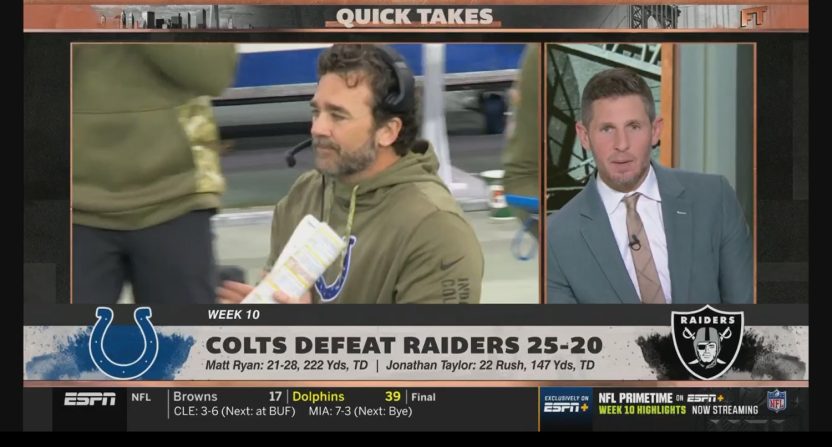 Jeff Saturday won his first game as head coach of the Indianapolis Colts Sunday afternoon, giving those who supported his hire a chance to gloat a bit and ESPN’s Dan Orlovsky ran with that opportunity Monday morning on First Take.

Colts owner Jim Irsay stunned the sports world last week when he hired Saturday away from ESPN to be the team’s interim head coach. Many criticized the unusual coaching hire considering Saturday’s ability to skip the line and go directly from ESPN’s studio to the NFL sideline. Despite the apparent privilege of landing an NFL head coaching gig without any experience, Saturday currently boasts a 1-0 record after defeating the lowly Las Vegas Raiders in his debut.

“You know what I don’t understand, we select players in the NFL and we place them above proven people because they’re more talented and they’re highly sought of because of the relationship they have with people,” Orlovsky continued. “This is the same case that happened with Jeff Saturday and for a person who’s inexperienced, certainly [didn’t] look like it. Good for him.”

While Orlovsky has not hidden from the fact that he would be interested in joining the Indianapolis Colts coaching staff in the future, many of his ESPN colleagues criticized team owner Jim Irsay for hiring Saturday, with Stephen A. Smith being among them. Smith defended those criticisms after Orlovsky took his brief victory lap on First Take.

“Yes you have an abundance of us who had questions about it,” Smith said of Saturday’s hire in response to Orlovsky. “Only as it pertains to the Rooney Rule situation. That’s the only thing we’re questioning is the process.”

Because Saturday was hired with the interim tag, the Colts were excused from following the Rooney Rule which requires NFL teams to interview minority candidates to head coaching job openings. Nearly all of Saturday’s now-former ESPN colleagues spoke very highly of his character and claimed they would be rooting for him in Indianapolis, but they were still critical of the hiring process. Saturday’s hiring exemplifies privilege and entitlement in a league that began the season with just three Black head coaches, despite nearly 60 percent of its players being Black.

Saturday supporters taking a victory lap after he led the Colts to an unconvincing victory over an even worse team in the Raiders is a bold move, but Orlovsky has not been alone in taking that stance on Monday. One win doesn’t justify Saturday’s coaching hire, it certainly doesn’t prove that he’s “more talented” than other candidates, and there’s no amount of wins that will ease the concerns of those who criticized the move by citing flaws in the hiring process.