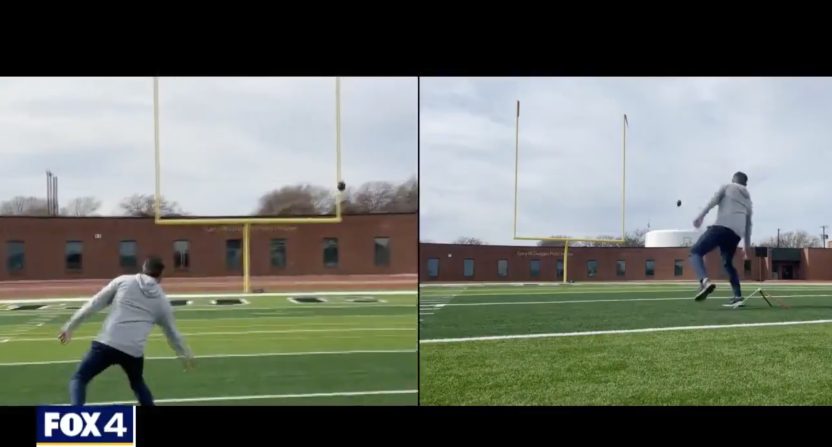 The Dallas Cowboys easily defeated the Tampa Bay Buccaneers to advance in the NFL playoffs but it was in spite of Brett Maher’s absolutely horrendous night kicking.

The usually reliable Cowboys kicker missed his first four extra point attempts in the game, breaking an NFL record. Maher made his fifth attempt to at least salvage a little confidence as the Cowboys won 31-14.

Cowboys head coach Mike McCarthy said postgame that the team is sticking with Maher, even though many people thought they could do much better.

Brandon Todd of Fox 4’s Good Day at Dallas-Fort Worth affiliate KDFW decided to see if he could do better than Maher. Todd took five attempts from the same spot Maher kicked his extra points and the result was…about what you’d expect from a morning news anchor.

Think you could do a better job kicking for the Dallas Cowboys than Brett Maher? @BrandonToddFOX4 decided to give it a shot. Here's what happened. ? pic.twitter.com/7TmPeYIOWw

Credit to Todd for improving throughout as he eventually caught some air on his kicks, but it was all for naught as his fifth attempt, the only accurate kick he had, fell short of the crossbar.

This isn’t the first time people have attempted to kick field goals to try and show they could do it. Three years ago, when Cody Parkey had his “double-doink” miss, many tried and failed to do better.

Even though the punter/kicker position might be the easiest position to master in football, there’s still a lot to it that the average person just cannot do. For one thing, you have to have a strong enough leg to physically kick the ball. Then you need to master the mechanics of running up and kicking. Everyone takes like six or so stutter steps and then wonders why their kick went nowhere. It’s all about form.

Once you have that down, there’s the pressure of booting the ball in between the uprights with millions of people watching and 11 opponents who want nothing more than to crush you. I played soccer when I was younger and I could kick field goals back when I was in high school. Now, I can maybe kick a 25 or 30-yard field goal, even with the correct mechanics, and that’s about it. I definitely can’t boot the ball 60+ yards like Maher has done multiple times this year. Even when I was younger I was nowhere close to that.

That being said, if the media couldn’t talk about people doing things they themselves couldn’t do, the vast majority of us would be out of a job. I don’t have to be a great singer to know when someone isn’t singing well, just like how fans and those of us in the media don’t have to have played pro football to know when someone is playing terribly. It’s just that, given that we can’t do what they do, maybe it’s best to cut these athletes a little bit of slack when they have the occasional bad day, like the people on Good Day did, instead of thinking we can do better than them while we sit on the couch watching.