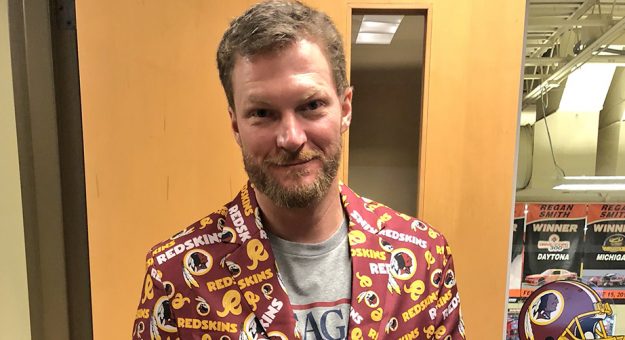 The Washington Redskins have taken plenty of heat for releasing safety D.J. Swearinger Monday after he criticized the team’s coaching decisions (and particularly those of defensive coordinator Greg Manusky), and some of that criticism comes from a surprising source: NBC NASCAR analyst Dale Earnhardt Jr. Earnhardt wasn’t happy that the team opted to bring in Reuben Foster after the 49ers released him following an arrest on a domestic violence charge and opted to keep Mason Foster after a fan leaked a private conversation where Foster said “F— this team and this fan base,” but decided that comments from Swearinger (a sixth-year veteran in his second season with the Redskins) about the defensive playcalling were a bridge too far:https://twitter.com/DaleJr/status/1077252001979875334Earnhardt has long been known for his Redskins’ fandom, with NASCAR fans even coming together to select the Redskins’ blazer above as a retirement gift for him last January, so it’s not particularly surprising to see him commenting on a big move like this from the team. And he’s far from the only one criticizing this move; even other Redskins’ players like Trent Williams seem to be expressing support for Swearinger, and many media members and fans are wondering why the team would release a talented player (Swearinger was selected as a Pro Bowl alternate this year, and could wind up there if enough players are injured or choose not to go; he said he might try to wear a South Carolina jersey instead of a NFL one if he gets to go) over criticisms of the team’s defensive scheme when they opted to bring in Reuben Foster and keep Mason Foster.But it’s interesting to see Earnhardt put a team he cares about so much on blast. And his doing so is notable, as he’s one of the most prominent Redskins’ fans out there; his tweet racked up almost 2,000 likes in its first two hours. His tweet here has brought a lot more national attention to this decision from the Redskins, and it’s leading to further criticism for them.[Photo from NASCAR.com]