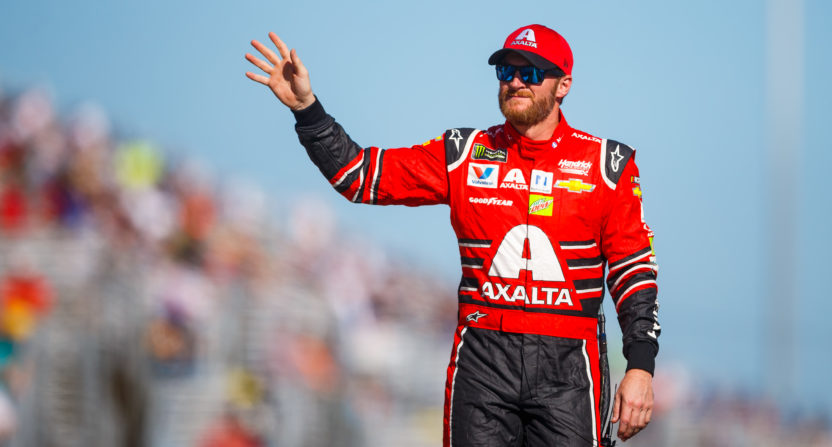 NBC hired Dale Earnhardt Jr. primarily to contribute to its NASCAR coverage, but before he gets to that, he’ll be asked to comment on some sports he doesn’t know quite so well.

NBC announced Tuesday that Earnhardt will debut on the network’s Super Bowl pregame coverage February 4 and then on its Winter Olympics coverage beginning days later in PyeongChang, South Korea. At the Super Bowl, Earnhardt will “share his great sense of adventure, as he takes part in some of the outdoor events and activities taking place in town leading up to kickoff,” per NBC. At the Olympics, he will “explore the culture, people, and traditions in South Korea, and experience Olympic competitions first hand” and comment on speed skating “through the lens of a racer.”

“We can’t wait to get Dale’s take on what is one of the most compelling aspects of the Winter Games — sports that offer a mix of speed with the prospect of danger, an equation that he knows very well,” Jim Bell, president of NBC’s Olympics production and programming, said in a statement. “I think he will have something unique to offer about the need for speed on snow and ice.”

NBC presumably hopes Earnhardt’s general affability and charisma will shine through, even as he discusses sports in which he has little expertise. Earnhardt retired from racing last year after being named NASCAR’s Most Popular Driver for a record 15th consecutive season.

Based on Earnhardt’s comments to the AP in a piece published Tuesday, it seems the network sees some cross-promotional value, as well. Any appearance Earnhardt makes in front of massive audiences at the Super Bowl and the Olympics will provide NBC another chance to plug its NASCAR coverage.

“It’s not going to be putting me anywhere outside of my comfort zone, obviously I’ve never been to a Super Bowl or South Korea,” Earnhardt told The Associated Press. “What they are asking me to do is just go out there and be myself and hopefully get people interested in tuning into NASCAR.”

Per NBC, Earnhardt’s contract allows him to participate in the NBC Universal empire beyond his role as a NASCAR analyst, including in movies, on podcasts, and on other television properties. Earnhardt has a while to wait before he finds himself on-set at a NASCAR race, as Fox will air the initial chunk of the sport’s slate, with NBC’s first event of the season coming at Chicagoland Speedway on July 1.