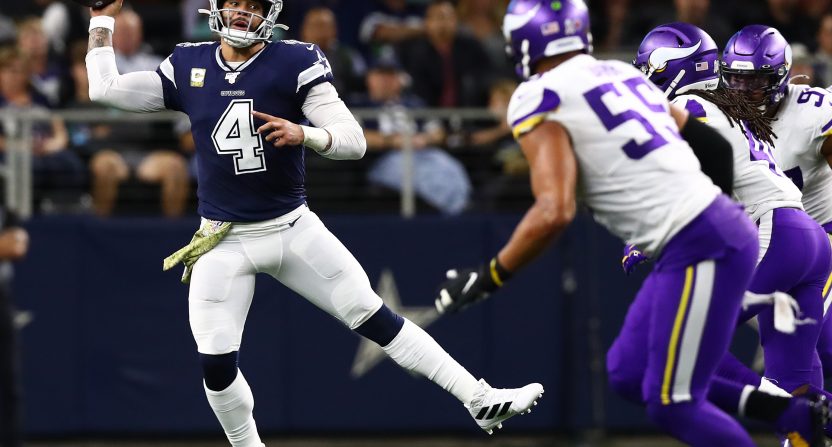 During NBC’s Sunday Night Football broadcast of the game between the Dallas Cowboys and Minnesota Vikings, the conversation naturally focused on Cowboys QB Dak Prescott. Currently embroiled in a contract battle with the team, Prescott is said to be headed towards the franchise tag as talks have died down.

Following a touchdown pass from Prescott to Michael Gallup in the second quarter, announcers Al Michaels and Cris Collinsworth started discussing the contract situation. Michaels said that Prescott told the duo during the week that he wasn’t worried about resolving the dispute. In fact, Dak apparently told Michaels and Collinsworth he’d “play for free.”

That insight led to Collinsworth going in on the idea that Prescott is not motivated by money because he’s already bought the most important things he needs or wants.

“He got his mom a house. He’s happy. He said sponsorships pay for a few other things.”

That sounds all well and good except for one thing. Dak Prescott’s mom passed away in 2013 from cancer when he was still playing at Mississippi State.

Now…it felt like Collinsworth either misunderstood something or jumped to a conclusion rather than purposefully trying to mislead anyone. But still…if you’re announcing a national broadcast involving the Dallas Cowboys, you should probably be solid on the important storylines and people that motivate their star quarterback.

“…the one woman in my life that has an impact on my life for the rest of my life is my mom. I mean, I’ll carry it with me forever. It will never be changed. The things that she taught me, the things she told me how to be a man, the things that she portrayed as a woman of putting other people first, of being selfless, hard work and effort, it’s something I try to mimic every day in my life.”

Collinsworth caught some grief from viewers and on social media following the gaffe but he was quick to apologize during the broadcast shortly thereafter. Cris noted that he was aware of what happened to Peggy Prescott and that he had merely gotten his words jumbled.

“He told us this week all he ever wanted to do was just take care of her and buy her a house. Apparently I said that in some very mangled way and I apologize for that…the relationship is so special I would never, ever want to do anything to get that twisted around.”

An awkward mistake but, as expected, an inadvertent one.