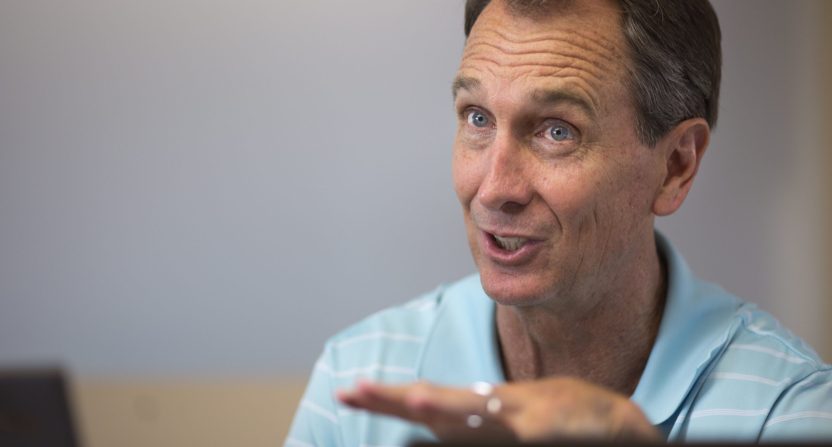 The Sunday Night Football game between the Green Bay Packers and Chicago Bears was always going to be centered on Aaron Rodgers.

The easiest throughline was calling back to Rodgers’ taunting Bears fans by saying “I own you” the last time they played. There’s also the fact that Rodgers is dealing with a bad toe injury while also putting up solid stats and leading the Packers to a 10-3 record (including four touchdowns last night). And you’ve got the will-he-won’t-he drama of whether or not this is Rodgers’ last season in Green Bay following all the off-season drama before (and during) the season.

And certainly, if you asked a lot of viewers, they’d have told you that NBC announcers Al Michaels and Cris Collinsworth went all-in on Rodgers, especially in the praise department.

Does anyone know how to turn it off the Green Bay home broadcast?

That alone would have been par for the course when it comes to a national broadcast of an NFL game featuring a Hall-0f-Fame quarterback. NFL fans have been living that scenario for decades, whether it was Joe Montana, John Elway, Peyton Manning, Brett Favre, or Tom Brady. Spending an inordinate amount of time hyping up the most well-known quarterback is just something these kinds of broadcasts are made to do, for better or worse.

But things took a strange turn when Collinsworth started carrying a bit too much water for Rodgers and his “honesty.”

"Have you seen a guy, and in particular this year, be more honest…" AND we're going to have to stop you right there, Cris pic.twitter.com/X4zN1Za3Fm

“He doesn’t care. Have you seen a guy, and in particular this year, be more honest about everything?” Collinsworth said. “You may not agree with everything he says, but we have heard from the beginning of this entire season exactly what he thinks about everything.”

Much like how people like Rodgers have confused contrarianism with intellectualism, Collinsworth seems to have confused “speaking up” with “being honest.” Because the one thing people know about Aaron Rodgers in 2021 more than anything else is that he was untruthful when initially asked if he had been vaccinated against COVID-19. This was literally the crux of the entire drama he found himself in early November.

Fox’s Terry Bradshaw called Rodgers a liar on national television for not answering the initial question honestly and then being indignant about it when he tested positive for COVID-19 later on. Joe Buck had a lot of fun referring to Rodgers’ “immunized” toe as a reference to the misleading language Rodgers used. He was skewered on Saturday Night Live over his evasive answering. Rodgers himself even admitted afterward that he “misled some people about my status.”

The reaction to Collinsworth’s attempt to paper over Rodgers’ lack of authenticity did not go unnoticed on social media by BFL viewers.

NO ONE HAS BEEN MORE HONEST THIS SEASON

Cris Collinsworth: “Have you ever seen someone as honest about everything as Aaron Rodgers?” pic.twitter.com/gKybNG9XcX

Cris Collinsworth: Have you seen a guy be more honest than Aaron Rodgers this season about everything… pic.twitter.com/k3bL1nPrgU

Cris Collinsworth making light of Aaron Rodgers messing with the media and spreading misinformation on COVID and vaccines is a bold choice.

To be fair to Collinsworth, he’s not the only NFL commentator working overtime to rehab Rodgers in real-time. CBS’s Tony Romo also took heat in November for saying that Rodgers had taken “responsibility” for “misleading” fans over his vaccine status, despite the fact that Rodgers never actually apologized.

The fraternity of people working in football broadcasting, covering those who play football, means they’re almost always going to try to sugarcoat and downplay the negative, either because they don’t want to be the bad guy or because it’s just how things are done.

As for Collinsworth, it’s certainly not the first time he’s been called out over something he’s said, whether it’s poking fun at health mandates, being surprised by the amount of football knowledge that women have, or insulting football fans and their lack of intelligence.