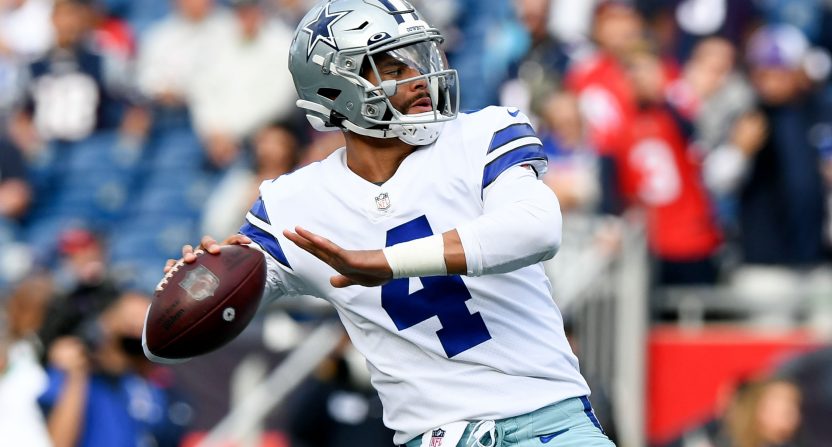 The Dallas Cowboys were in need of a win on Thursday night, and the New Orleans Saints provided the perfect opportunity to stop the skid. Dallas went into New Orleans and picked up a pretty convincing 27-17 victory on Thursday Night Football.

Many bookies offered odds for the game and have listed the Cowboys at -4.5, while the Saints at +4.5. Those interested in risk-free bets can take advantage of them.

Dallas has been dealing with some issues over the last few weeks. But the team was able to put together a solid effort on Thursday night. The Cowboys were even playing without their head coach Mike McCarthy after testing positive for COVID-19.

This has been the point of the season in which Dallas has started to fall apart in recent seasons, but picking up a win over New Orleans could allow them to go on a big run. The loss was a crushing blow to the Saints, who fell to 5-7 with the loss.

Dallas jumped out to a 7-0 lead with less than a minute remaining in the first quarter as Dak Prescott hit Michael Gallup for a one-yard touchdown reception. That lead didn’t last long as Tayson Hill found Lil’Jordan Humphrey early in the second quarter to even the score.

This game featured very little offense in the first half, as Dallas would manage just two field goals in the second quarter. A 13-7 halftime lead gave the Cowboys some momentum, but the lead could have been much larger if Dallas got better play from Prescott.

Prescott completed 26 of 40 passes for 238 yards but threw an interception to stall a drive. The Cowboys were getting great play from Prescott to begin the year, but he has started to struggle a bit of late.

The biggest play in the game came in the third quarter, and it was Troy Pollard who sparked the Cowboys. Pollard broke free for a 58-yard touchdown run that gave the Cowboys a 20-10 lead, and they would be able to hold on from there.

Even though the Cowboys scored 27 points on Thursday night, the defense dominated this game. Carlos Watkins had a 29-yard interception return for a touchdown in the fourth quarter, but the defense was dominant the entire night.

Saints quarterback Taysom Hill threw four interceptions in this loss, and he also struggled to hit his receivers that were open. Life without quarterback Drew Brees has been rough for the Saints, but things hit rock bottom in this loss.

Hill did his Deonte Harris for a 70-yard touchdown pass in the 4th quarter, but the game was already decided at that point. New Orleans could not recover an onside kick, and the Cowboys iced the game after that.

Dallas is now 8-4 on the season, but four of their final five games are against teams from the NFC East. The Cowboys are on the road in Week 14 for a matchup with the Washington Football Team.

The Cowboys now remain big betting favorites to win the NFC East at Unibet Sportsbook, and they are getting close to wrapping up that elusive division title.

Futures betting odds continue to be updated after each game is played, and the Cowboys are now at -1000 to win the NFC East. The Washington Football Team is keeping the pressure on a bit, but they still have odds set at +1000, and it would take a historic run to win the title.

The Cowboys also improved their odds to win the NFC Championship, but they are still chasing some impressive teams. Dallas now has odds set at +550 to win the NFC, but just getting into the playoff field is the most important step.