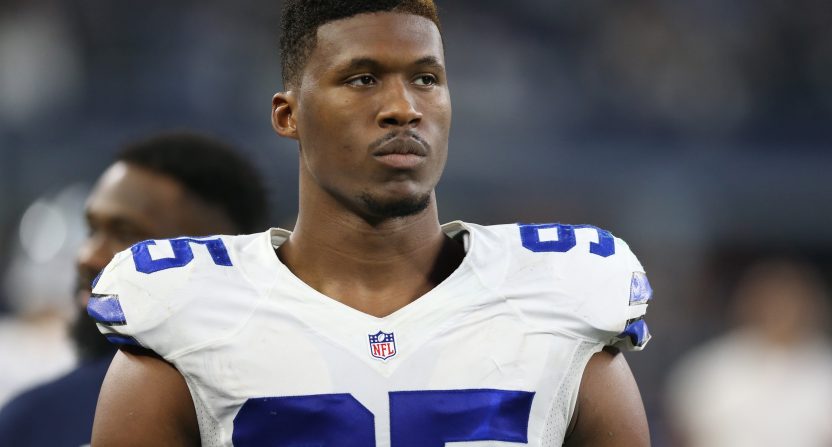 Dallas Cowboys defensive lineman David Irving was suspended indefinitely by the NFL last Friday for violating the league’s Policy and Program for Substances of Abuse. It’s the third suspension of Irving’s NFL career; he was banned for four games in both the 2017 of the 2018 seasons.

Well, on Thursday night, Irving announced that he’s done playing in the NFL, at least until the NFL changes their marijuana policy.

And the 25-year-old announced his decision to quit playing in the NFL while smoking a blunt on Instagram live.

Alright so I guess David Irving is done with football.

“So, basically guys, I quit… I’m outta there. I’m not doing this shit no more.” pic.twitter.com/vS6t0iJF4u

David Irving cont: “Some people are like ‘oh you’re addicted to weed’… I’d rather be addict to that than the Xanax bars or the hydros or the seroquel that they feed you.” pic.twitter.com/Hps7Hg3GD8

That’s one way to announce retirement and make a point about the league’s marijuana policy.

Here are some of the quotes from Irving’s Instagram video(s):

“So, basically guys, I quit. They want to talk about a suspension and all this other nonsense. I’m outta there. I’m not doing this shit no more.”

“Everyone questions my commitment to football, but let’s get it straight- I love football. But I don’t love the NFL. The NFL is not football.”

“We got this opioid thing going on and I’m prescribed all that bullshit, and I just think it’s bullshit that we’ve got to deal with that policy Everyone thinks it’s about smoking weed. It’s not about smoking weed. It’s much bigger than that. Much, much bigger. Hell, I have concussions every day. I get to see around the office how that fucks your head up and I feel it.”

“If I’m going to be addicted to something, I’d rather it be marijuana, which is medical. It’s medicine, I do not consider it a drug.”

Even before the news of Irving’s suspension, the Cowboys reportedly weren’t interested in bringing him back, so he was set to be a free agent. The 6’7″, 290-pounder had 12.5 sacks over four seasons with the Cowboys after being an undrafted free agent out of Iowa State.