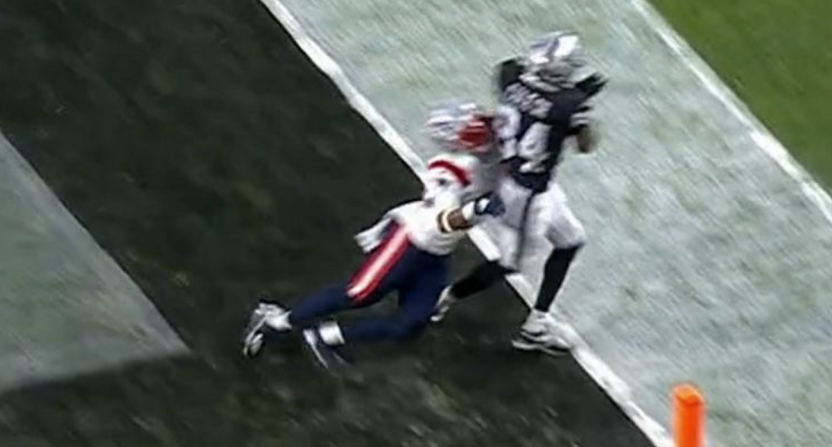 The NFL generates an impossible amount of revenue every year.

The league’s broadcast partners have staked their own boatload of cash on the ability to monetize the league, with the NFL routinely dominating ratings charts.

Maybe most importantly, camera technology is cheaper and smaller than ever.

Taking all those factors together, we have to ask a fairly simple question: why the hell can’t we get more and better boundary angles?

The Patriots and Raiders played one of the most incredible games of all time on Sunday thanks to what happened on the final play of the game.

What just happened?? The @Raiders win on the final play!! #NEvsLV pic.twitter.com/cmKNUuab1k

First of all, it’s important to take a second here to appreciate that final play for what it is: abjectly hilarious in all the best ways. It isn’t enough that Bill Belichick’s Patriots made a high-risk/low-reward decision that ended up costing the team a loss against Belichick’s former assistant Josh McDaniels. No, in addition to all that, Mac Jones ALSO had to eat one of the most devastating stiff arms ever along the way. God, it’s perfect.

But we almost didn’t get that play, which would have been a tragic deprivation for all of us. (Even Boston fans, who will thrive in their anger and misery as that’s when they’re happiest. This is truly a victimless blooper. Aside from Mac Jones.)

With thirty seconds left in the fourth quarter, the Raiders tied the game thanks to a 30-yard Keelan Cole touchdown catch.

The Raiders tie it!

At least, it was ruled a catch; replays make it look like, perhaps, it was incomplete, especially if you’re a New England homer.

Keelan Cole was an inch away from a game-tying TD pic.twitter.com/MztuR8P2Ko

With the call on the field a touchdown, replay would have had to show the classic clear and obvious evidence to overturn the call, and in this case the officials deemed it too close to make that decision. Which brings us to the main point: how are we supposed to tell from these angles?

Sure, it’s a slightly weird spot of the field, but it’s not like the end zone sideline is an unimportant area. It’s also not like there isn’t real estate for cameras there; the play takes place right in front of the back pylon. We have pylon cams all over the place now in pro and college football production. Can we not get static boundary angles to resolve these issues?

According to referee Walt Anderson, the rear end zone view was the best option, and obviously there’s no way to truly tell on a play this close from that angle and distance.

Walt Anderson's explanation for upholding the Keelan Cole touchdown leaves something to be desired. pic.twitter.com/3Ewr5ASWH6

How does the NFL not have better end zone sideline camera coverage than the average homeowner with a doorbell camera? This is just absurd. Ironically, Belichick himself has long been a proponent of this, going back to 2015 when he ripped owners for being too cheap to install them.

Granted league owners are probably wary whenever Bill Belichick starts talking about more camera coverage, but this is long overdue. Just put more cameras in stadiums and on the field. It won’t fix every call or prevent plays like this from ever being controversial, but it’s a move that would certainly reduce the frequency.

Plus every stakeholder involved can afford to.