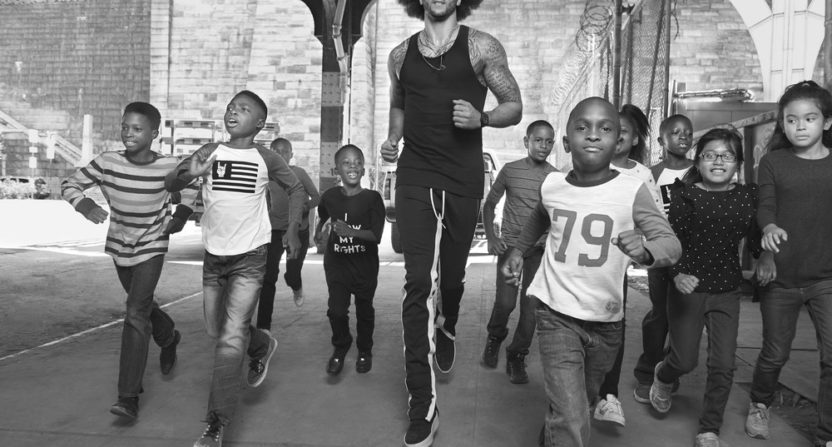 Colin Kaepernick announced a forthcoming memoir today that will be released through Kaepernick Publishing. A Kaepernick memoir almost certainly would have sparked a bidding war in the publishing industry, but Kaepernick instead chose to launch his new company, which will partner with Audible for an audio version and on future content.

Part political awakening and part memoir, Kaepernick’s memoir will reveal the life experiences that led him to risk his career as a star NFL Super Bowl quarterback in one silent act of protest. Kaepernick Publishing has also entered into a multi-project deal with Audible to create original audio projects focused on amplifying the voices of notable authors, creators and other influential figures.

“My protest was the culmination of years of thought and experiences, of learning and unlearning. I want to tell the story of my evolution, and the events that led me to protest systemic oppression, in hopes that it will inspire others to rise in action,” said Kaepernick. “I am excited that through this groundbreaking partnership between Kaepernick Publishing and Audible, we can elevate Black and Brown voices who can empower future generations.”

Kaepernick expanded upon his goals with the memoir and with the publishing company during a wide-ranging interview with Jarrett Bell at USA Today. The whole interview is worth reading, of course, touching on things from Kaepernick’s desire to play football to what the book will cover. This quote, though, on the desire to control his own story, stood out:

“I realized being able to control your narrative and tell your story the way you want to is very important,” Kaepernick said. “The manipulation, the colonization, the distortion of stories, narrative, history, has been done forever. This is a way for me to be able to counteract that and begin to decolonize that and centralize the narrative of not only myself but other black and brown writers and authors.

“One of the quotes that comes to mind is Malcolm X’s quote, ‘If you’re not careful, the newspapers will have you hating the people that are being oppressed and loving the people that are doing the oppressing.’ He’s speaking to the control of the narrative. So for me recognizing the importance of our community being able to control our own narratives and tell our own stories, this is something I thought had to be the next steppingstone for us to properly address and identify not only how we view ourselves, view our communities and how we tell our stories but also giving the world to view us in the way that we want them to as well.”

There’s no official release date yet, but obviously when the book does come out, it’s going to be a major topic of sports media conversation.