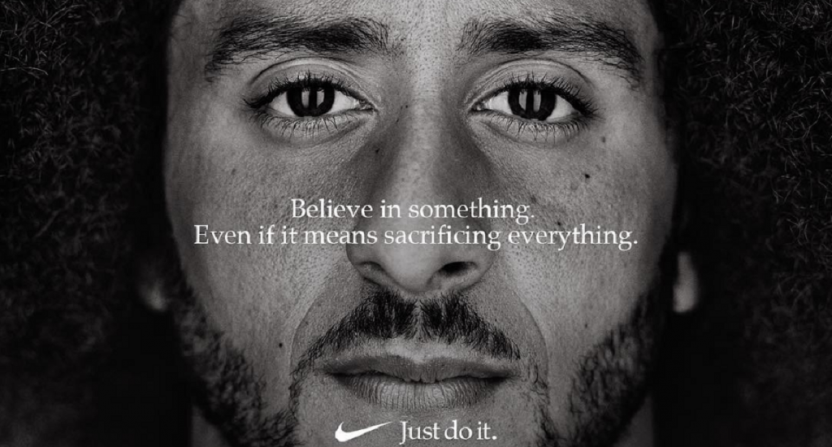 “We believe Colin is one of the most inspirational athletes of this generation, who has leveraged the power of sport to help move the world forward,” Gino Fisanotti, Nike’s vice president of brand for North America, told ESPN.

“We wanted to energize its meaning and introduce ‘Just Do It’ to a new generation of athletes,” Fisanotti said.

Nike unveiled a powerful ad for the campaign on Monday, featuring a portrait of Kaepernick and the message, “Believe in something. Even if it means sacrificing everything.”

Believe in something, even if it means sacrificing everything. #JustDoIt pic.twitter.com/SRWkMIDdaO

Especially proud to be a part of the Nike family today. #justdoit pic.twitter.com/GAZtkAIwbk

In the 2016 NFL preseason, Kaepernick began sitting and kneeling during the national anthem to protest racial injustice and police brutality, and continued to do so throughout the regular season. This started a large movement of such protests across the NFL. Kaepernick played in 12 games for the 49ers in 2016, starting 11 of the games. He hasn’t played in a game since, and has an ongoing collusion case — filed in Oct. 2017 — against the NFL.

Through all of this, Nike still kept Kaepernick on their payroll (the endorsement agreement began in 2011), but avoided putting him to use over the last two years. That obviously changes with the new campaign. It’s going to be a “wide endorsement” featuring shoes and “Kaepernick apparel,” according to Yahoo! Sports’ Charles Robinson:

Details on Kaepernick and #Nike:

– It’s wide endorsement. He’s going to have his own branded line. Shoes, shirts, jerseys, etc. There will be Kaepernick apparel.

– Contract is a “star” deal on par with a top end #NFL player. Millions per year. Star deals also include royalties.

Naturally, the Kaepernick Nike ad campaign has gotten a ton of reaction — both positive and negative, of course — on social media. Some of the many examples (including some guy actually setting his Nikes on fire):

::laughs in hypocrisy at all the people who were all good with Nike when the company was accused of abusing kids in sweatshops, but are sooooooooo outraged at the Colin Kaepernick campaign::

I’m just here to remind folks that last year Colin Kaepernick was in the top 50 in NFL jersey sales, despite not being on a roster. Nike made a business move.

Told y'all from Day One this has always been about the money. All of it. Revolutionaries aren't sponsored by major corporations. It's been a hustle from the giddy-up.

I Always thought the Air Jordan’s craze was silly. But I will be buying 10 pairs of Those "Air Kaepernick’s" when they come out. Well done @Nike

“You can take the superhero out of her costume, but you can never take away her superpowers.”

“Believe in something. Even if it means sacrificing everything.”

Nike embraces Serena & Kaepernick, two of the culture’s most powerful athletes, with voices that transcend their sports pic.twitter.com/yJn6WUuw1x

my question on this kap deal: nike gonna do any buys during nfl games?

Nike is a huge business. They’ve calculated risk. They may even have reason to believe this will make the brand more popular which means the guy burning his white air monarchs is in the minority. Bitter pill to swallow, I’m sure. Good luck w the protest. Bet they anticipated it.

Nike's roots are anti-establishment and risk taking. Few thought you could sell a signature basketball shoe of an African American, but Jordan made them. Tiger. Williams Sisters. Women's sports. And so on. Will Kaepernick work? Don't know. But this is what they do.

My joy: Colin Kap has income from Nike to fund his works. Nike makes the NFL's gear and this is a thumb in Goodell's eye.
My fear: it's Nike. Corporations don't fund rebellions: they control and destroy them. If anyone can navigate this snakepit, it is Kap. But it won't be easy.

Word of advice….If you’re planning on burning your @Nike clothes and shoes, how about you give them to homeless vets instead. You know the same vets that everyone claims to care so much about. Let’s really help them instead of just talking about it.

If Nike had wanted to go full social justice warrior they could have gone with Aly Raisman as a thirty year spokesperson and sent a powerful message embraced by virtually everyone. Kaepernick is a disaster. Fallout will be massive.

Our Soundman just cut the Nike swoosh off his socks. Former marine. Get ready @Nike multiply that by the millions. pic.twitter.com/h8kj6RXe7j

There’s sure to be much, much more reaction to this Kaepernick Nike ad campaign continues, and it’s well-timed by Nike with the NFL season kicking off on Thursday.