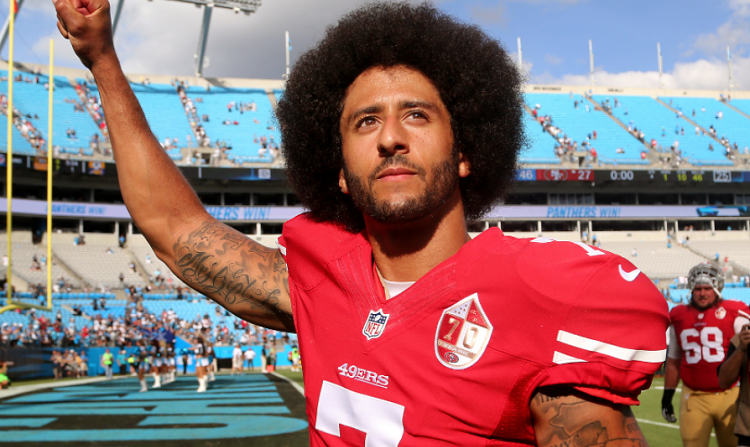 GQ magazine certainly isn’t shying away from attention with the cover for its 2017 Men of the Year issue. Colin Kaepernick will be the face on the cover of the publication’s December issue, a provocative choice that is sure to generate a sizable amount of controversy.

Those who prefer a cover without Kaepernick can potentially choose the other covers produced for GQ’s Men (and Women) of the Year issue, which include Golden State Warriors star Kevin Durant, late-night talk show host Stephen Colbert and Gal Gadot, now known throughout the world as Wonder Woman. Which cover subscribers might receive in the mail is a toss-up, of course.

Considering he’s a quarterback who hasn’t played in an NFL game for nearly a year, Kaepernick might be a curious choice for a Man of the Year and cover photo. But it certainly can’t be argued that he hasn’t made an impact in the culture during that time. The former San Francisco 49ers star started a movement among his NFL peers and fellow athletes by being the first player to kneel during the national anthem. Kaepernick intended the gesture as a protest against social injustice, particularly police brutality against black people in this country. Many have taken offense to the protest, however, perceiving it as a slight against the national anthem, American flag and military.

Here’s a look at the cover photo of Kaepernick:

The GQ editors explained in their announcement of Kaepernick being named “Citizen of the Year” that he will also team with the magazine on a project intended to “reclaim the narrative of his protest,” which has been hijacked by many who have misinterpreted and spread misinformation about his message, including the current President of the United States.

I'm honored to be recognized by @GQMagazine as Citizen of the Year. https://t.co/s6wBZTa6tH

As the cover story details, Kaepernick and GQ have assembled a 10-person team with a variety of figures such as former 49ers teammate Eric Reid, director Ava DuVernay, activist Harry Belafonte and rapper J. Cole to express their views on equality, protest and activism. The feature also includes several photos of Kaepernick by Martin Scholler that are meant to capture the spirit of Muhammad Ali’s protests against the Vietnam War during the 1960s.

Kaepernick’s initial protest has taken on additional life throughout the NFL, causing a great deal of anxiety and anger among league officials and team owners as fan support and TV ratings have arguably been affected. The protest has also spread to other professional and amateur sports, and even in civic gatherings such as city council meetings with people going down to one knee during the national anthem to demonstrate against social injustice.

Whether you agree with the movement Kaepernick started or not, it can’t be argued that he’s made an impact and started a national conversation. Sure, GQ is trying to sell magazines with a cover choice that’s certain to be controversial. But it’s also an acknowledgement of what’s going on in the culture right now, which is what publications like GQ are supposed to reflect for their readership.