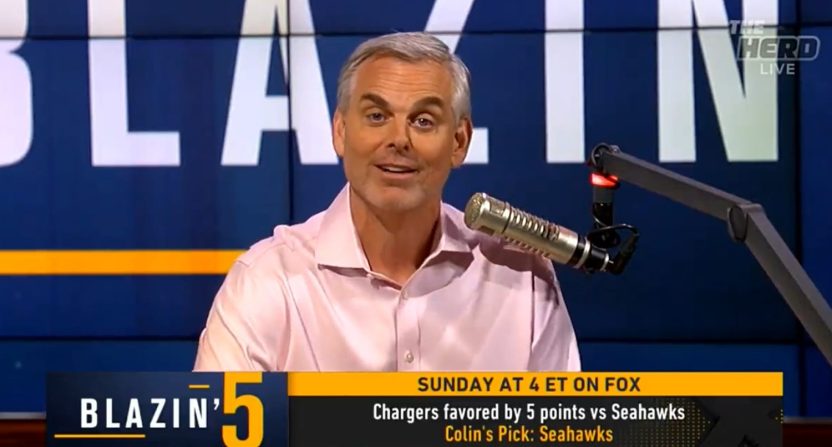 Cowherd gets a bad rap at times over his propensity to give hot takes. He’s a talented radio host who keeps listeners engaged with weird analogies and strong, sometimes arrogant, opinions. While “gotcha journalism” will often catch Cowherd flip-flopping on a previously forecasted declaration, the radio host doesn’t hide from the fact that he’s willing to waffle on an opinion. But where Cowherd shouldn’t get a pass, is when he gets a fact blatantly wrong.

Friday afternoon, Cowherd briefly broke down the Seahawks’ upcoming matchup against the Los Angeles Chargers. And in his expert opinion, Cowherd picked the Seahawks to win, crediting their offensive line and running game led by Rashaad Penny.

Our guy @ColinCowherd likes the Seahawks this week, in part due to running back Rashaad Penny. Eleven days ago, it was announced that Penny will miss the rest of the season with a broken fibula. A minor detail, to be sure… pic.twitter.com/2KMZfpodH2

“We’ve got to be honest here, these rookie offensive tackles for Seattle – Kenneth Walker, Rashaad Penny – this offense now is for real,” Cowherd said. “We’ve got a little upset here. I think the Seahawks win a wildly entertaining game, 28-24.”

We’ve got to be honest here, Cowherd’s analysis could have worked in Weeks 1-5 of the NFL season. But considering Penny fractured his fibula in Week 5 and was placed on injured reserve after undergoing season-ending surgery, it’s safe to say the running back won’t be leading Seattle to victory over the Chargers on Sunday.

Cowherd’s gaffe was very reminiscent of Stephen A. Smith previewing a Chargers-Kansas City Chiefs matchup back in 2018.

“Also looking at the San Diego Chargers on offense, I’m thinking about Hunter Henry and the way he’s played this year and as effective as he’s been,” Smith said in Dec. 2018. “He’s going up against Derrick Johnson, and I’ve gotta keep my eyes on that.”

Smith, however, gave us three brutal mistakes in his one bit of analysis. The Chargers were already in Los Angeles, Henry had been on the PUP list all season, and Johnson was released by the Chiefs 10 months prior to Smith giving his Thursday Night Football preview.

At least Cowherd only had one bad mistake in his analysis. But the most egregious part of Cowherd’s blunder is that it occurred during his Blazin’ 5 segment, a segment meant to provide listeners with betting guidance. In a way, Cowherd did unknowingly give solid betting advice I guess. Using an injured running back as justification for his pick only highlighted how silly it is for nearly every sports radio host in America to act like an expert when picking football games. Tune to your favorite radio show for entertainment, not gambling tips.

With all that said, watch the Seahawks prove Cowherd right by beating the Chargers 28-24 Sunday afternoon.