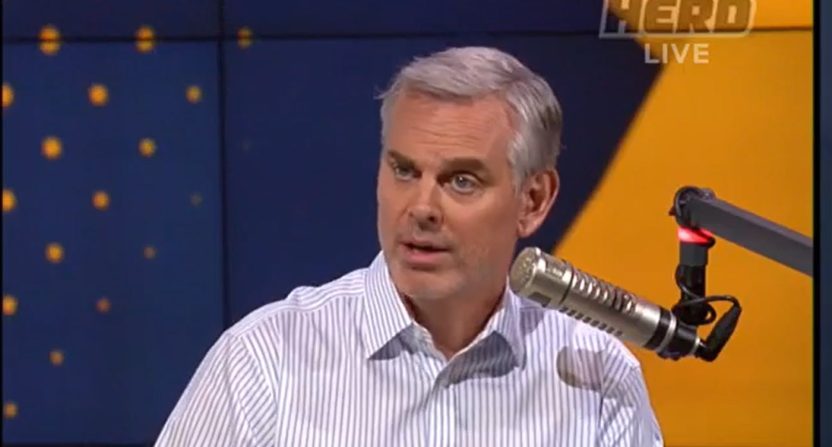 We’re just four weeks into the NFL season, but it already appears obvious that Carolina isn’t a long-term fit for Baker Mayfield. Colin Cowherd, however, has an idea for Mayfield’s next stop, the broadcast booth.

According to Cowherd, Mayfield isn’t enough of a “grown-up” to be a successful NFL quarterback, but there’s plenty of room for him to join the Fox Sports Radio host’s business.

“If I owned a network, I’d put Baker on as a college football announcer tomorrow,” Cowherd said after co-host Jason McIntyre pondered whether Mayfield might choose broadcasting over being a backup in the NFL. “Absolutely. Tomorrow! Now he’s not [Joel] Klatt or [Kirk] Herbstreit, but I would put him on a college game. He’s got huge credibility collegiately, he’s totally outspoken.”

“I think Baker Mayfield, tomorrow, as a college football analyst, I think he’d be in the No. 2 booth within two years,” Cowherd continued. “He loves Oklahoma football, he has unbelievable passion for it. There’s nothing wrong with that. He doesn’t need the money. He could be a huge star as a broadcaster.”

There’s no doubt Mayfield contains the star power, personality, candor, and entertainment value to eventually add something to a broadcast booth. Mayfield might not even have to become a “huge star” to make more money as a broadcaster than he would as a backup quarterback.

But as Mayfield’s big personality bodes well for a potential transition to television, the quarterback doesn’t hide his constant competitive desire or growing chip on his shoulder. That might not fit the description of an NFL quarterback inclined to leave the playing field at 27 years old to test his ability as an analyst.

In 2020, Mayfield still looked like the Cleveland Browns quarterback of the future, leading the franchise to their first playoff appearance since 2002 and their first playoff victory since 1994. Mayfield doesn’t appear to be a franchise quarterback, but it’s also tough to imagine he’s ready to give up on his playing career the way most fans and analysts excluding Skip Bayless already have.