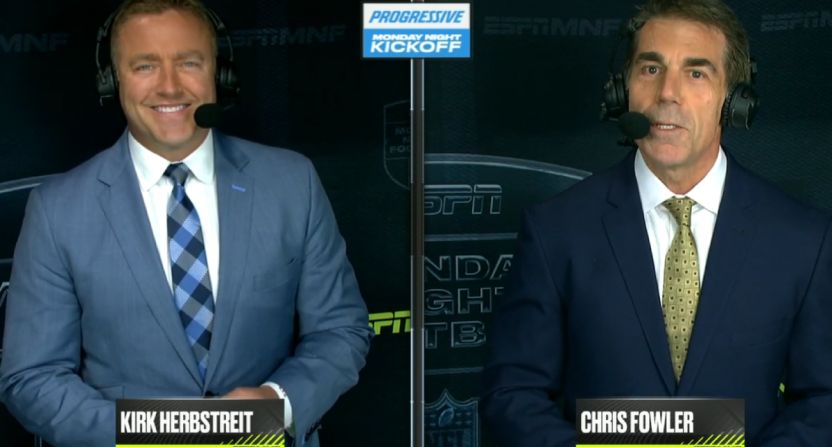 The NFL’s weekly schedule is much harder to track this year thanks to COVID-19 forcing games to be postponed, either for weeks or for a few days.

This week, for example, we’re scheduled to get our first Tuesday night game of the season, with Titans-Bills airing on CBS.

Titans-Bills game scheduled for Sunday is being moved to Tuesday at 6 pm as long as there are no more positive tests with Tennessee, per sources.

Bills-Chiefs game being switched from next Thursday to Sunday but goes back it more positive tests in Tennessee, per source.

No positives this morning for both the Titans and Patriots means that their games now are on track to be played.

We’re also set to get another Monday Night Football doubleheader on ESPN, with the Broncos and Patriots playing the first leg at 5 PM Eastern time. And as they did for Week 1 of the season, Chris Fowler and Kirk Herbstreit will have the call, according to a report from Andrew Marchand.

ESPN will have Chris Fowler and Kirk Herbstreit with reporter Laura Rutledge for the Patriots-Broncos game at 5 p.m. Monday, according to sources.

Unlike Week 1, though, Fowler, Herbstreit, and the production crew will be in the middle of what they normally do every fall: college football. That means a quick turnaround will be required from Saturday’s Clemson-Miami game.

Chris Fowler and Kirk Herbstreit will still do Miami-Clemson on ABC Saturday. Then, their entire crew, including producer Bill Bonnell & director Derek Mobley, will travel to Foxboro.

The new regular MNF booth has gotten most of the attention for being a solid crew and a big step forward for ESPN, but Fowler and Herbstreit received very good reviews for their NFL performance as well. That ESPN is able to call on this team (the entire team, too, in front of and behind the camera) is huge; they’ve been producing and calling big-time football games for years now, and it shows.

It’s also interesting that the game is being shifted to ESPN from CBS. CBS obviously has another national game Tuesday they wouldn’t have otherwise had, unlike last week when they shared Monday night with ESPN for the delayed Patriots-Chiefs game. It’s hard to imagine ESPN being happy about that at all, even if everyone’s working from a spirit of cooperation in 2020. That the very next week sees ESPN given the extra Monday game isn’t that surprising, all things considered.

This is also probably not the last week this is going to happen. The Jets, for example, sent everyone home today.

After a presumptive positive player test today, all Jets players and coaches were just sent home, per source.

The NFL has clearly decided that a fluctuating schedule (among many other, arguably riskier factors) is a price worth paying in order to try and have the season. It means broadcasters are going to have to be able to adjust as well, and ESPN’s ability to hand a game to one of the best football booths and production crews on the pro or college side makes things a lot easier for them.