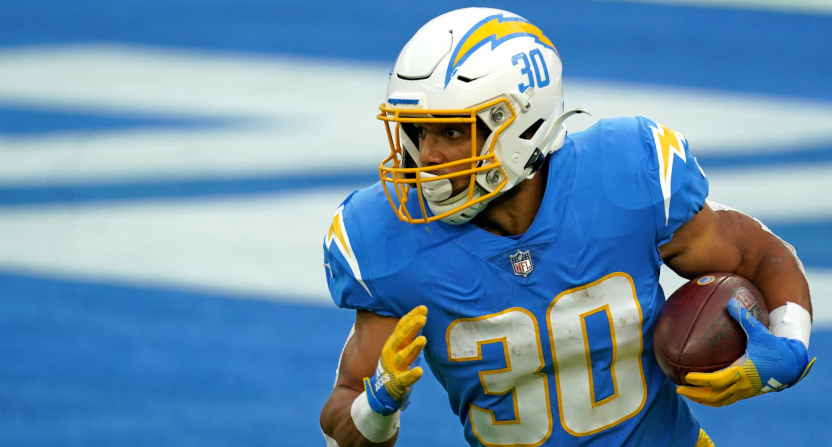 There are going to be lots of content options around the first night of the NFL Draft on Thursday, April 29, from ESPN and NFL Network TV coverage to radio coverage to all sorts of alternative feeds. One particularly interesting alternative is what Los Angeles Chargers’ running back Austin Ekeler (seen above in a December game against the New England Patriots) is doing, though. Ekeler has become known for his individual Twitch streams and for his Gridiron Gaming Group (which he co-founded in January with Dynamic Sports Group’s Cameron Weiss, launching it as a way to help athletes expand their reach and connect with their fans through gaming), and he and GGG did a three-hour live Big Game Streamer Event around the Super Bowl this year. Now, they’re doing something similar for the draft with a three-hour “GGG Draft Day” live stream on Ekeler’s Twitch channel that will feature him, co-host Jordan Schultz, and many other athletes and celebrities from both inside and outside the NFL world. Here’s more on that from a release:

Los Angeles Chargers star running back Austin Ekeler and the Gridiron Gaming Group announced the GGG Draft Day Event, a livestream NFL Draft show on April 29 from 8-11 p.m. ET / 5-8 p.m. PT exclusively on Twitch. During the stream, Ekeler and co-host Jordan Schultz will welcome GGG teammates, current NFL players, athletes from the sports world and celebrity fans to react to their team’s pick and interact with fans throughout the night.

Ekeler spoke to AA about this by e-mail, and said his goal was to try and bring what he and other NFL players involved with GGG are doing to a wider audience around the draft.

“I wanted to incorporate GGG into a social event that’s built off of a bigger platform,” he said. “We have members of GGG that are part of bigger platforms like the NFL which have special events life the Super Bowl or Draft where a lot of people come together and it’s a really social atmosphere. That gave me the idea to do a Draft Day social with people across different leagues and organizations.”

He said it’s been enjoyable reaching out to other NFL players about joining this, and he’s gotten great response.

“It’s been really fun reaching out to people to offer them the opportunity to share the things they’re involved with and passionate about. I want this experience for them to feel like they’re able to plug into a new audience and atmosphere, and hype up projects, businesses, foundations, etc they’ve been working on in front of a diverse and large viewer base. We’re leveraging each other’s platforms through our Draft Day social in a way that’s interesting and enjoyable for fans as well.”

It’s interesting to see an event like this also feature NWSL and WNBA players, an IndyCar driver, and a Fan Controlled Football co-owner/ex-Bachelorette. Ekeler said it makes sense to go wide with the guest list here, as the connections he’s trying to build between athletes and audiences aren’t just for the NFL.

“The importance of the connection between athletes and fans is equally important across all different sports. Other leagues have their own fan bases that, when we join together, make the fan/athlete connection even stronger.”

This is going to be the second big GGG event around a NFL tentpole, following that aforementioned Big Game Streamer event around February’s Super Bowl LV. That three-hour event drew more than 700,000 unique viewers, as per GGG’s release this week. Ekeler said that event went well, but also gave him some things to build on for this one, specifically with keeping viewers as the focus throughout.

“I learned to make sure that the community is the number-one priority while streaming. The goal is to make sure that they’re getting the most out of their viewership experience through interactions, giveaways, and a mix of different content from our members and guests.”

Ekeler has been streaming on Twitch and connecting with fans there since early 2020. He said it’s an excellent platform for getting that kind of interaction with fans during a stream.

“Twitch is a great fit for an event like this because it’s a really social platform. The reason it’s appropriate to have our event here is that we want it to be an interactive social event where guests have real-time interaction with the viewers. Twitch is always looking to push the creative boundaries as far as what they’re putting out on their platform, which aligns with us at GGG in continuously putting out new and diverse content that keeps our fans engaged.”

With GGG overall, the focus isn’t just on promoting streams from Ekeler. Other team members they have include Chargers wide receiver Mike Williams and defensive tackle Justin Jones, Philadelphia Eagles cornerback Avonte Maddox and running back Boston Scott, Las Vegas Raiders long snapper Trent Sieg, New York Jets defensive end Bryce Huff, Los Angeles Dodgers pitcher Tommy Kahnle, Dallas Wings guard Allisha Gray, and IndyCar driver Daly. Their mission, as per their release, is “to give athletes the tools needed to be a successful gamer, including tech setup, streaming coaching, creative consulting, sub & follower growth and sponsored event activations.” Ekeler said the idea came from seeing the connections he was able to build through streaming, and wanting to help others do the same.

“It’s been a focus for me once I realized the importance of community involvement and connecting with fans on a more deeper level than just following on social media. I was quickly able to realize that making these deeper, offline connections is going to build a stronger, more long-term connection between fans and athletes. I wanted to help other athletes who wanted to build these same stronger bonds do it to the best of their ability.”

And while “Big Game Streamer” and “GGG Draft Day” are elaborate events tied to NFL tentpoles, Ekeler said they have opportunities to do events at much smaller scales, too; anything involved athletes are interested in.

“GGG is looking to do many types of social events all year round. Any reason to come together, be social, and talk amongst one another whether it be for a sporting event, holiday, birthday, charity, tournament or beyond.”

GGG Draft Day will air on Ekeler’s Twitch channel on April 29 from 8 to 11 p.m. Eastern.