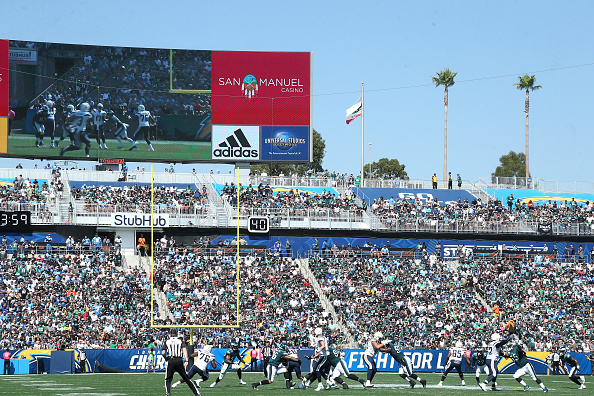 The Rams are finding success on the field under Sean McVay, off to a 3-1 start behind a resurrected Jared Goff and high-scoring offense. However, they are failing to put butts in seats at the L.A. Coliseum with the franchise down over 25,000 people per game in attendance.

It’s even worse for the Chargers playing at the Stubhub Center. They can’t even fill the Galaxy’s stadium at 30,000 capacity with tarps now covering seats. Equally as embarrassing as the light attendance is the fact that a significant chunk of those at Sunday’s game against the Eagles were wearing green.and the team’s home venue filled by fans of the opposing team.

The NFL’s attendance issues are a huge red flag in Los Angeles with a multi-billion dollar stadium on the way. But growing the fanbase on local television may be proving to big an even bigger challenge.

Los Angeles sportscaster Fred Roggin tweeted out the local ratings for Week 4’s games in the L.A. market. Neither the Chargers or the Rams drew top spot, that belonged to the Colts-Seahawks Sunday night game. The Rams couldn’t even draw top spot playing America’s Team in Dallas as their game against the Cowboys came in at #2. The Chargers? Tied for the FIFTH MOST WATCHED NFL GAME in Los Angeles with the Steelers-Ravens tilt. Those two cities are 2,500 miles away from Los Angeles. But that’s not even the worst news for the Chargers trying to grab a toehold in the Los Angeles market.

Do you see what game ranks fourth place, ahead of Chargers-Eagles? That would be the Dolphins-Saints game that took place in London, England – a game that was aired in Los Angeles at 6:30 AM local time.

Let that sink in. The Chargers lost in local ratings to a game played before much of the population even got out of bed.

This isn’t a one week fluke either, but likely to be a trend that we will see throughout the season. NFL fans in Los Angeles have had two decades of watching the best and biggest games every week and not having to be tied down by a local market franchise. This was always going to be the concern with teams coming to Los Angeles. The market just doesn’t want to support an NFL team of their own, let alone two teams.

The Rams have a big enough of a challenge on their own trying to reestablish a fanbase after leaving for St. Louis over two decades ago. But the Chargers? They face what looks to be an increasingly fruitless endeavor in trying to gain fans in Los Angeles.

If they can’t fill a soccer stadium, and they get outrated by a game played before the crack of dawn, what hope do the Chargers have in Los Angeles?